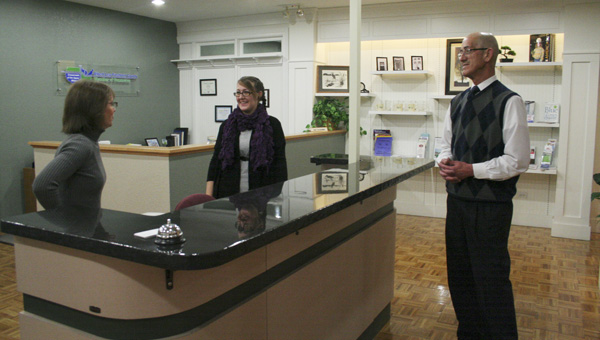 Professional with a touch of warmth. 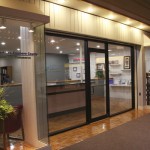 The Albert Lea-Freeborn County Chamber of Commerce has a glass front in its new location at Northbridge Mall. -- Michelle Haacke/Albert Lea Tribune

A glass front and smooth, black granite counter along with two large office spaces in the front give the office a sleek, clean and professional appearance. Sage green walls and shelves lined with Albert Lea and Freeborn County memorabilia give it warmth.

“We’ve received absolutely nothing but positive responses,” said Kehr. “I’m so appreciative of the thoughtful process our board went through when considering the choices with the design.”

After several temporary moves last year, the chamber moved into its new home at Northbridge Mall on Dec. 7.

Since the move, foot traffic has nearly quadrupled. Sales of Chamber Bucks were up this winter. 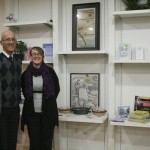 Sue Axsmith, Randy Kehr and Elizabeth Dickerson stand next to memorabilia and promotional items in the front office at the Albert Lea-Freeborn County Chamber of Commerce on Friday. -- Michelle Haacke/Albert Lea Tribune

“In our old location, we had to be your destination,” Kehr said. “Here, we’re in front of people. They are already coming to the mall, or they are in the mall and seeing our office triggers something in them that they need to stop.”

Now located in the former Bath & Body Works space, directly across from the Albert Lea Driving School, Kehr said they were able to use some of the elements from the former store.

“It was a big, open space, so the walls were built to our design, but we used the white shelving from the old Bath & Body Works,” he said.

The hardwood floors from the old store were sanded down and topped with two coats of polyurethane, which gives it a brand new sparkle.

The white shelving and pegboard in the offices and the boardroom are peppered with community products — glass steins and coffee mugs, promotional fliers and travel guides, along with framed photos and local art.

Chamber awards won through the years line the boardroom walls in a space where the long, oval table doesn’t seem so disproportionate as it did in their old office. 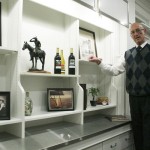 “We’re working with the historical society on getting some more pieces for the walls in here,” said Kehr.

The 2,600-foot space contains two workspaces in the front office and four offices down the hall with a boardroom in the back. The space was designed to be energy efficient, with all of the lighting compact fluorescent bulbs, programmable thermostats and office motion sensors. Kehr said the way it was designed ensured there is no “wasted space.”

He’s also pleased with the openness of the front office and that there’s no isolation of any of the employees.

“I think the general public is more aware of what we do and who we are, because we are more visible,” he said.

Before several temporary moves last year, the chamber’s previous home was at the corner of Bridge Avenue and Marshall Street. Kehr said the chamber decided to move because its lease was up and they had the opportunity to move into the mall, which offered much better parking and a larger space for offices and the boardroom. 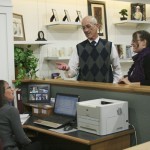 The chamber has signed a five-year lease on its new location. The chamber employs three full-time workers and one part-time worker. Perry Vining from the Big Island Rendezvous also has his office in the new space.