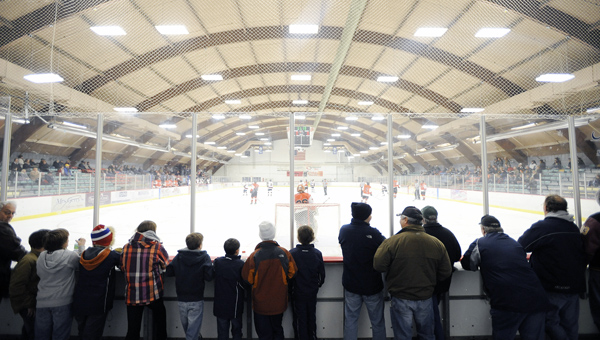 Albert Lea boys’ hockey fans line the east side of City Arena Tuesday, resting their arms on the plastic bar rail. The bar rail was built when the Thunder moved into the arena and began selling beer. -- Andrew Dyrdal/Albert Lea Tribune

The Albert Lea City Arena has quietly undergone a facelift over the past three years with many behind-the-scenes improvements funded by the former Thunder hockey team and the city.

But when the Thunder left in early 2010, a plush locker room, players’ lounge and offices were left empty. Those lockers are soon to be filled.

Furland and his staff are in the process of repainting the locker room they built for the Thunder in 2008, prepping it for the Waldorf College hockey team, which begins playing at City Arena in October. The team will bring more use to an upstairs lounge that was a popular host for private parties and corporate events and a plastic bar rail with bar stools along the east side of the main sheet of ice. 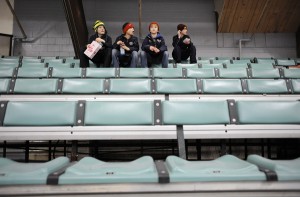 The improvements in the locker room and upstairs lounge cost about $60,000.

Furland said if it weren’t for those amenities Waldorf likely wouldn’t have chosen the City Arena as its home ice.

“I think Waldorf will be a great tenant to have,” said Albert Lea Parks and Recreation Director Jay Hutchison. “We look forward to a good, long-lasting relationship.”

Waldorf’s locker room, now stripped of any Thunder colors and logos, has a players’ lounge, recreation room with table tennis, a laundry area, showers and a private bathroom. Much of the space is carpeted and also features offices for Waldorf’s coaching staff.

“I feel very comfortable at the arena,” Waldorf hockey head coach Douglas Ross said. “There’s a nice locker room and having two ice surfaces is very accommodating. It was the best place for us to go.”

Ross said the second sheet of ice is important because he is also trying to start a women’s hockey team to begin play in 2012. 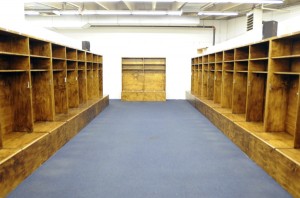 The upstairs lounge has three large windows overlooking the rink and three rows of cushioned seats from the Marion Ross Performing Arts Center. It also has three offices that were paid for by the Thunder and could also be used by Waldorf’s coaching staff.

The Thunder also bought a speaker system in 2009 used to play music before, during and after games and during practice. It too remained at the arena and will be used by Waldorf.

Furland said he is unsure whether Waldorf will attempt to acquire an alcohol license to sell beer at home games, but the bar rail and stools will be used for the first time since the Thunder left.

In 2008, the city installed a blanketed dehumidifier that runs from the east end of City Arena west along the apex of the curved ceiling.

The city also installed a new cooling tower, used to remove heat from the compressor. The compressor is now air-cooled instead of water-cooled. In the winter with the water-cooled system, Furland and his staff would have to chisel ice off the structure.

Hutchison said the new compressor system, including infrared heaters over the bleachers, cost the city about $600,000. Fans appreciate the heaters.

This past summer, crews replaced City Arena’s roof with new metal shingles after it was damaged during high winds and storms in June.

He said the metal shingles are expected to have a lifespan of at least 50 years and should be able to withstand more than the previous asphalt-shingled roof did.

What still needs to be done?

Though there have been many improvements large and small made to City Arena in recent years, Hutchison said there is still one major renovation that needs to take place: the bleachers.

He said the bleachers were installed in the mid-1970s when a new sheet of ice opened up, and the company that manufactured them is no longer in business. Thus, the city can’t get replacement parts.

On top of that is the problem that the bleachers barely meet state regulations, so the city is working to find a way to replace them.

He estimated that the cost for the bleachers in both arenas could be as much as $500,000.

Hutchison said the city has had preliminary discussions with the Albert Lea School District about contributing to the project because of the district’s role as one of the main tenants. City leaders will have similar discussions with other users.

Though there is no timeline for the renovations, Hutchison said he hoped the project could become a reality in the next year or two.

A lot of the future of this project will also depend on decisions legislators make regarding local government aid to the city.

Hutchinson also said the arena needs a new ice resurfacer in the next couple years.

City Arena, 701 Lake Chapeau Drive, was built in 1966 as part of Lea College, which operated in the Lake Chapeau neighborhood from 1966 to 1973. When parent school Parsons College in Fairfield, Iowa, faltered in ’73, so did its satellite schools, one of which was Lea College. Vestiges in the neighborhood remain, such as Campus Drive and the Lea College Fieldhouse, which became City Arena. The ice was added in 1976.