Albert Lea city leaders are asking for the public’s input on a proposal to update the downtown.

The plan, which covers covers Broadway Avenue starting at Front Street on the south and Fountain Street on the north, has been in the works for several months. 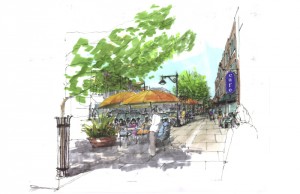 One of the renderings of the downtown proposal. -- Submitted photos

Jahnke said the downtown is in major need of reconstruction in the near future, as the sewer and water were installed in the 1930s. The last time the sidewalks, lighting and other similar amenities were replaced was in the 1970s.

The current cost estimate for the upgrades are $7.4 million; Jahnke noted it would be about $5 million just to cover the sewer, water, electrical, roads and sidewalks.

He said having a plan in place will help the city prioritize and plan for grants.

The proposal was made by Minneapolis architect Pat Waddick, who has been involved with several other downtown projects in Albert Lea, including the exterior renovations of the Freeborn National Bank Building. He worked with the Parks and Recreation Department, the Engineering Department and the Community Development Department.

He said he started by documenting the existing area — including things such as widths of buildings, sidewalks, fire hydrants and parking spaces and then developing from there.

Waddick said Broadway Avenue was created as the heart of Albert Lea, and it should be a place of celebration.

The plan also includes widening the sidewalks to be 24-feet wide instead of the current 16 feet, slowing traffic down and potentially taking the street lights out at Clark Street, William Street and College Street and making them four-way stops. 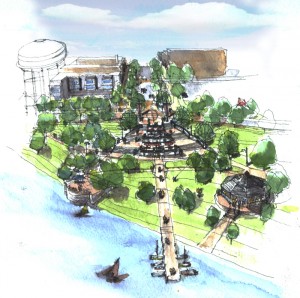 The streetscape proposal calls for making Fountain Lake Park a place of celebration.

The proposal incorporates a “complete streets” idea, where cars, buses, pedestrians, bicycles and scooters can all share the road without one dominating the other.

One of the largest changes involves making a plaza on William Street between the Freeborn National Bank building and the Shoff building, including a fountain, planters and seating where there is currently the street.

Fountain Lake Park would also be expanded, under the proposal, to become a place of celebration around what is already in place. It incorporated space for parallel boat docking and an activity dock, along with the gazebo and lookout area already there.

The proposal incorporates many more trees than are currently in place and even goes as far as to suggest specific types of trees and plants to include.

Waddick also talked about implementing new street lights, seating, planters and even information kiosks, where information could be posted about the businesses in each block and the public could post events as well.

He said if the proposal is approved, the city could use it as a roadmap to investment, doing a little at a time or saving money each year until enough is obtained.

If people would like to view the proposal, they can stop by the Community Development Office or the Engineering Department. City staff are also willing to make presentations to groups that are interested in hearing more as well.