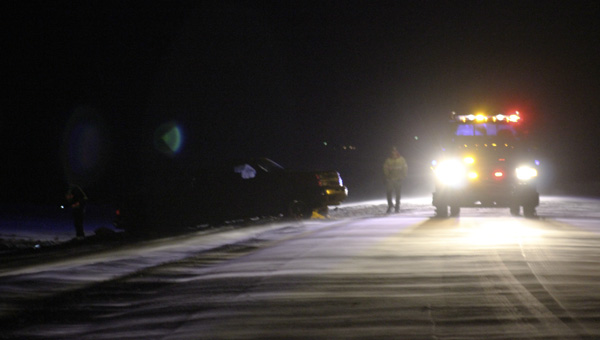 A vehicle crash with injuries was reported on Interstate 90, three miles west of Albert Lea, at 8:24 p.m. Wednesday, according to Freeborn County Sheriff’s Office reports. Sheriff’s Office logs stated deputies were assisting the Minnesota State Patrol at the crash. With crashes like this, the State Patrol typically writes the reports about the incidents; however, no information was available on its media website.

Many cars go in ditches

A Dodge Dakota was reported in the east ditch of Interstate 35, five miles north of Albert Lea, at 8:48 p.m. Wednesday.

A vehicle was reported in the ditch of Interstate 35 near a mile north of the Iowa border at 7:07 p.m. Wednesday.

Vehicles were reported in the ditch of Interstate 35 near mile 15 and 16 just before 10 p.m. Wednesday.

Fraudulent activity was reported on the checking account for Sanderson Auto, 131 W. College St., at 12:50 p.m. Wednesday, according to police reports. No other information was available as of press time.

Kwik Trip, 906 W. Front St., reportedly received an anonymous call just after 10 p.m. Wednesday that a man wearing a long black trench coat with a gun was in the area of the store. No other information was given.

Mayo One had repairs in A.L.

Residents in Albert Lea saw the Mayo One helicopter had been grounded at Albert Lea Medical Center since Saturday evening. After landing that evening the pilot asked mechanics to look at the helicopter, and it was determined it needed repairs. Mechanics were waiting for parts to complete repairs and expected it to be flown back to Rochester sometime Wednesday, according to Glenn Lyden, spokesperson for Mayo Clinic medical transport.

The man arrested Tuesday in connection to the June robbery of Lakeside Café & Creamery was not charged in Freeborn County District Court Wednesday for the crime. He is expected to instead be charged today.