The funeral service for Dorothy Lorraine Peal Godtland will be at 10 a.m. Saturday at Grace Lutheran Church, Albert Lea. The Rev. Todd Walsh will officiate. Visitation will be from 5 to 7 p.m. Friday at Bonnerup Funeral Service, Albert Lea, and one hour before service at the church. 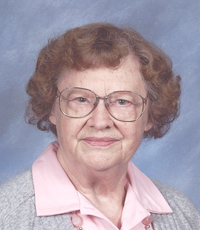 Dorothy was born to Edward and Elsie Peal on May 10, 1923, in Wells. She attended Ramsey School and country school District 37, and graduated from Albert Lea High School in 1942.

She was married to Arvin Donald Godtland in April, 1943. During WWII, while Don was overseas, she worked at the Land O’ Lakes Egg Drying Plant and the American Gas Machine Company running large machines and welding. Later she worked short times at Woolworths and the Three Sisters’ Store. She enjoyed making crafts and sewing, and for many years through December 2010, she corresponded with several ladies in the “23ers,” a pen pal club of women across the United States who were all born in 1923.

Dorothy was a charter member of Grace Lutheran Church where she taught Sunday school, was part of a visitation committee, was active in the women’s groups, attended several national Lutheran Women’s conferences, and she enjoyed being a member of the Esther Circle.

Memorials may be referred to Grace Lutheran Church and the American Cancer Society.