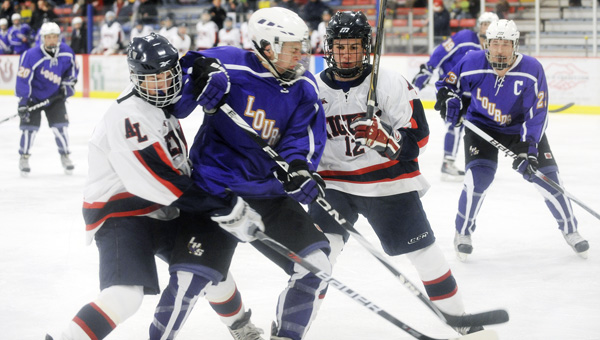 The Albert Lea Tigers boys’ hockey team had their chances Tuesday against Rochester Lourdes at City Arena but couldn’t find the net in a 4-0 loss to the Section 1A rival.

“Lourdes was much better than we were tonight,” Tigers head coach Roy Nystrom said. “Our best chances were when we didn’t take the shot. As a result, we didn’t get anything.”

Farrell scored the game’s first goal after stealing a pass off a faceoff in the Tigers’ zone and taking it all the way unassisted 2:49 into the second period.

Farrell notched a short-handed goal three minutes later to put the Eagles ahead 2-0.

The Eagles’ Rory Vesel put Lourdes ahead 3-0 off another Tigers’ turnover and the game out of reach.

“That’s what happens when you play a team like this,” Nystrom said. “They’re going to take advantage of turnovers.”

“We were very poor on the power play tonight,” Nystrom said. “We had a lack of communication on several plays.”