The funeral service for Eleanor Edith Klingbeil of Albert Lea will be 4:30 p.m. Thursday at Zion Lutheran Church, Albert Lea. The Rev. Joel Vano will officiate. Interment will be at a later date. Visitation will be from 6 to 8 p.m. Wednesday at Bonnerup Funeral Service, Albert Lea and one hour before the service at the church. 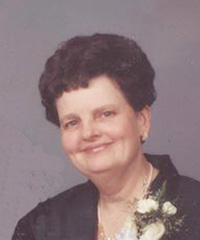 Eleanor was born May 20, 1946, at Mapleview, to William and Edith (Davis) Schocker. She graduated from Austin High School, Austin, in 1964. Eleanor has lived in Austin, Wells, and since November 1973, Albert Lea. She married Ralph Klingbeil on Feb. 20, 1971, at Waldorf. She was a member of Zion Lutheran Church where she taught Sunday school. Eleanor has worked for Streater Inc. for 32 years. She was a member of the Plasterers and Cabinet Makers Union.

Eleanor enjoyed bird watching, the Minnesota Twins and was an enthusiastic hockey mom and hockey grandma. She enjoyed going out to eat with her friends. She was an avid fan of her grandsons and was a very devoted grandmother. Eleanor was a hard working person who always put others first. She will be missed by all who knew her.

Eleanor is survived by three children: Randy Klingbeil and his special friend Carrie Messner of Winder, Ga.; Lisa Loge and her husband Mike of Apple Valley and Bill Klingbeil and his wife Amber of St. Paul; grandchildren: Brandon and Zach Loge, Cole, Tyler, Dylan and Andrew Klingbeil; brother, LeRoy Schocker and his wife Edna of Albert Lea; many nieces and nephews; and by many loving friends.

Eleanor is preceded in death by her parents: William and Edith Schocker; husband, Ralph Klingbeil; and brother, Billy Schocker.

Special thanks to all who cared for her.