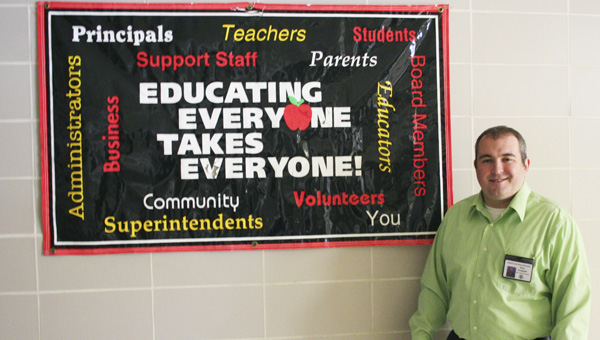 Eric Hudspith poses for a photo at the district administration offices in Brookside Education Center. Hudspith has been facilities and transportation director for almost a year. -- Kelli Lageson/Albert Lea Tribune

The new facilities and transportation director for Albert Lea’s school district has had an eventful year in the position.

Eric Hudspith started the position last February and immediately had the difficult task of helping the district’s elementary schools deal with overcrowding.

At first he had to assist principals in looking at ways to use the building creatively for the 2010-11 school year. Then he assisted administrators and school board members in looking at which way would be best to realign the schools to fit the students better.

On Oct. 18, Hudspith led a tour of Albert Lea High School and Brookside Education Center to talk with administrators and school board members about all possible options.

“My role was to gather information and look at all the costs,” Hudspith said.

On the tour Hudspith was asked questions about how lunches, busing and locker areas would work, among other topics. He helped administrators learn about the amount of renovations and costs associated with moving students to certain schools.

Though school board members looked at other factors than just cost, they were thankful for the information Hudspith gave them to help their decision. In the next school year many students will move around, including sixth-graders to Southwest Middle School and eighth-graders to ALHS. It’s a decision Hudspith is happy with as well.

He said the realignment will fit the district’s long-term needs. Hudspith also said the district looks at how the buildings are being used every year to make sure they’re as efficient as possible.

Another big part of Hudspith’s job is helping Superintendent Mike Funk decide whether to close or delay school when bad weather hits. Hudspith said he typically wakes up around 4:30 a.m. in the winter to check weather reports and drive around town if necessary.

“Our community is just big enough that you can’t just look out the window,” Hudspith said.

He usually drives around north of town and talks with Albert Lea Bus Co. employees, who drive around the south part of town. Together they talk about wind, cold and other weather factors before Hudspith makes a recommendation to Funk.

Before he started as director of facilities and transportation, Hudspith taught sixth-grade at Lakeview Elementary School, and before that he taught kindergarten at Sibley Elementary School. During summers he owned a small construction company where he did remodeling projects. He said he wasn’t actively looking for an administrative position, but he was excited to use his construction skills in a way to help the district.

“It’s exciting to use those skills while remaining in education,” Hudspith said.

He likes being able to collect bids and quotes from contractors and look at how to prioritize repairs at all the buildings in the district. He credits the maintenance and custodial staff with keeping the district’s buildings, which he said are quite old, as nice as they are.

“We’re making sure the buildings are safe and welcoming,” Hudspith said.

Other duties of his include checking the buildings for radon and asbestos and completing those reports yearly. The transportation part of his job is working on bus contracts for the district, and he also helps principals with discipline on buses.

Outside of work Hudspith enjoys spending time with his wife, Emily, who teaches at Halverson Elementary School, and their children, Ella and Cole. He also enjoys fishing trips in northern Minnesota in the summer. He predicts his family will stick around Albert Lea and said he enjoys it here. Hudspith said he enjoys the staff he works with and working through issues as they arise.

Man stabbed; no arrests yet