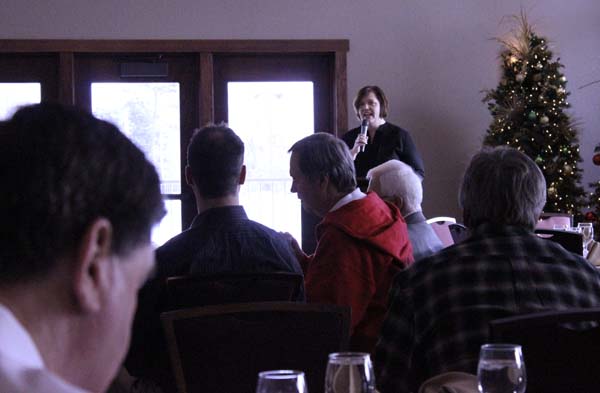 In the 20th century, there were automobile clubs and good roads associations that advocated for the construction of highways, freeways and paved streets in Minnesota. State leaders soon discovered that quality roads were good for commerce.

Now that it is the 21st century, there are groups advocating for the improvement of the structure of Minnesota’s information superhighway. That, in a nutshell, is what the organization former Minnesota House Speaker Margaret Anderson Kelliher presides over does.

She is the president and CEO of the Minnesota High Tech Association. She spoke Wednesday at Wedgewood Cove Golf Course in Albert Lea at the annual luncheon of Greater Jobs Inc. and the Albert Lea Business Development Center.

Anderson Kelliher said 96 percent of Minnesotans have access to broadband, as defined by the FCC (768 kilobits per second). While that might seem like a big number, it still leaves out 64,000 households, she said.

Moreover, only 84 percent have access to download speeds fast enough for video streaming, file sharing and teleconferencing (10 megabytes per second). In other words, more than 300,000 homes are left out.

In Freeborn County, broadband is available to 92 percent of residents. The download speed averages 5.5 megabytes per second, with upload speed averaging 0.7 megabytes per second. Those connection speeds place the county in the middle when compared to other Minnesota counties. Still, the Twin Cities area has 99 percent availability, with 9 meg download and 3 meg upload.

Minnesota ranks 30th when it comes to broadband availability.

She plugged the book “Where Good Ideas Come From: The Natural History of Innovation” by Steven Johnson. The book, she said, describes how innovation frequently happened in human history as a result of people communicating more from greater and greater distances.

Anderson Kelliher said as more people interact more often thanks to the Internet, more innovation happens. She noted her organization is a bit “metrocentric” and hopes to push it toward working more in Greater Minnesota. The former speaker lives in Minneapolis but grew up on a dairy farm near Mankato. Indeed, many people know she was a former dairy princess.

The Minnesota Legislature hopes to be in the top five states for speed and availability by 2015, she said.

The 30-year-old Minnesota High Tech Association works with more than Internet, though. It promotes the growth and sustainability of technology in general and has the support of 350 corporations, including the well-known Minnesota companies of 3M, United Health, Mayo Clinic and IBM. Every year, it gives out awards called the Tekne Awards.

She started her talk by noting three major methods her organization advocates technology.

Minnesota has 131,000 high-tech jobs, she said. That places it at 17th in the nation. It has 7,800 technology companies. The average annual wage is $77,400, which is 68 percent more than the average private sector wage. Thirty percent of all Minnesota exports are from the technology field, which does include agricultural technology, she said.

Anderson Kelliher’s organization works with schools to connect the business community and the education community with mutual interests. She told the story of a teacher who sought flash drives but didn’t have the budget for them. The Minnesota High Tech Association was able to give some leftover from a business convention to that teacher.

Anderson Kelliher said the speech in Albert Lea is the first she has given as president of the Minnesota High Tech Association. She told a story of how the final e-mail she had from her account at the Minnesota House of Representatives was funny. She said it was about pest control because the second floor of the Capitol has a rodent problem.

“I deleted the e-mail account off my phone after 12 years,” she said.