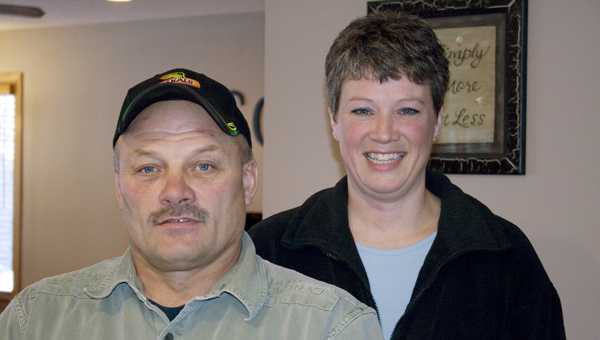 ALDEN — For Jim and Brenda Cords of rural Alden, receiving the Commissioner’s Good Farm Neighbor Award from the Minnesota Department of Agriculture in December was like the final chapter of a book. 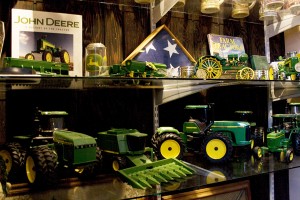 The Cords collect John Deere memorabilia on a shelf in their basement. -- Michelle Haacke/Albert Lea Tribune

“You feel like you’re just caught up in this story, so much happened last year,” said Brenda. “This was like a storybook ending for us.”

Of course, their story begins long before 2010. 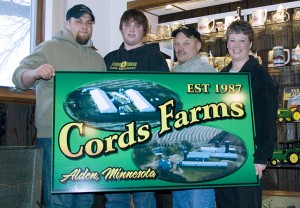 Jim grew up on a farm near St. Clair, and farming ran deep for him, as well. Jim and Brenda were the third generation to take over the family farm in rural Alden in 1987.

Since that time, the industry has changed and the Cords’ have changed their practices with it. They rotate corn and soybeans on 1,200 acres. They phased out the sow herd and converted everything to nurseries. They added two finishing barns in 2007.

Their sons Josh and Andy have helped on the farm for as far back as the boys can remember. The boys have always hoped to continue the family tradition in the future. 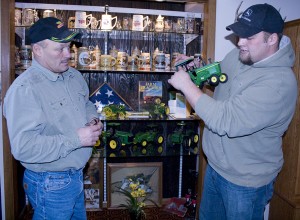 Josh Cords, right, uses a model John Deere tractor to illustrate a story as he talks about the tornado that hit the family farm while Jim Cords, left, looks on. -- Michelle Haacke/Albert Lea Tribune

“This is not a job, it’s in our blood,” said Josh. “We want to show there are still young guys like us who want to put their best foot forward in the ag community.”

In May, Andy graduated from college, armed with knowledge of the land which would carry the Cords boys into the next generation of agriculture. This was a high point in their storybook year.

Then in June, the tornado hit.

The twister took a machine shed shop and four hog barns on Jim and Brenda’s farm in a matter of seconds. The very same twister destroyed Josh’s farm — taking half his house, a machine shed, a utility shed, two hog barns and three grain bins — just before touching down on the Cords’ homestead.

“It didn’t level us, but twisted things up good,” said Jim.

The Cords’ were then faced with lifelong decisions. There was no doubt they would continue farming. The question became how to best move forward with their sons’ futures in mind.

Some of the buildings were still there but not structurally sound.

“We made the decision to take all of the buildings down and start over,” Jim said. “Some of these buildings were more than 20 years old so we thought it would be best to get into new, more efficient buildings for our boys.”

Coincidentally, the dairy barn destroyed by the tornado had been built in 1952, to replace another barn wiped out by a tornado.

During the demolition and rebuilding process, the Cords’ worked closely with environmental agencies to make sure they were taking the proper steps in disposal. They followed county and state regulations to a tee.

As the rebuilding began, so did their spirits. And then they received the Good Neighbors award in December.

This award is given out once each month to a farmer in Minnesota. Winners are selected by a committee representing the University of Minnesota, the Minnesota Pollution Control Agency, the Minnesota Soybean Research and Promotion Council, the Minnesota Corn Growers Association and the state Department of Agriculture.

“It was very humbling to get this award,” said Brenda. “It sums up so much for us. You try very hard to do the best you can, to be a good livestock producer and neighbor. It’s nice to be recognized.”

While the Cords’ take pride in being the best neighbors they can be, they also commend their own neighbors. Immediately after the tornado twisted up their operations, Jim said more than 50 people showed up with tractors, trucks and skid loaders to help begin cleanup. Various organizations showed up with food and help, as well.

“Bad things happen and we can’t forget this happened to a lot of good people,” Josh said. “The neighborly support we’ve received has been great.”

“The take-home lesson in all this is the strength in our community,” Jim said. “It was unbelievable how the community pulled together. We just want to thank everybody.”