Funeral services for Harold J. Neist, of Albert Lea, will be held at 10 a.m. Saturday at the Trinity Lutheran Church in Albert Lea. The Rev. Curtis Zieske will officiate. Visitation will be held from 4 to 7 p.m. Friday at the Bonnerup Funeral Service and one hour prior to the service at the church. Interment will be in Lakewood Cemetery. Military honors will be accorded by the Albert Lea area veterans groups. 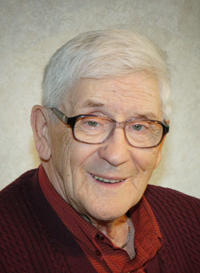 Harold was born May 18, 1922, in Freeborn County, the son of Nels Christian and Thomine M. (Thorgersen) Neist. He attended public school in Freeborn County. Harold served his country in the U.S. Army and was honorably discharged in November of 1945. On Sept. 16, 1945, he was united in marriage to Evelyn Williamschen at the Trinity Lutheran Church in Albert Lea.

Harold was employed at Wilson’s packing plant and Sorenson’s Meat and Lockers on the north side of Albert Lea and later purchased the business and along with his wife and operated the business until 1986. He was also engaged in farming his own farm in Freeborn Co. He was a lifetime member of the Albert Lea American Legion and the VFW. Harold loved to work but always saved time to follow his family in their sporting events.

Harold was preceded in death by his parents; wife; daughter, Nancy Delger; six brothers and sisters.