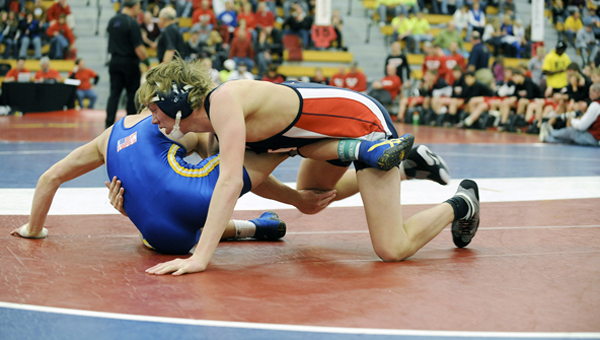 In wrestling seasons jam-packed with high-profile tournaments, section finals and the pursuit of a state championship, regular season conference duals can seem like a formality. 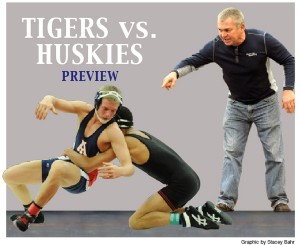 That important match is the annual meeting between the Tigers and Owatonna Huskies, and has determined the Big Nine champion the past 10 years.

Over the last decade, the Tigers and Huskies have each won the conference title five times. The Tigers claimed four straight from 2006-09 and the Huskies won it last season. Now Goodnature wants it back.

“Our team goals are to win the conference championship and get to state,” he said.

Historically, a win could secure both as the Tigers and Huskies wrestle at 7:30 p.m. Thursday at Albert Lea High School. 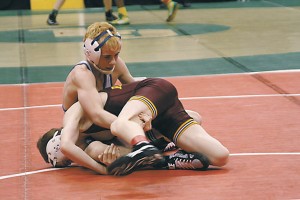 Owatonna’s 112-pounder Nick Scheffert, above, is ranked No. 2 in the state in his weight class. -- Derek Sullivan/Owatonna People’s Press

For the past seven seasons, the Big Nine champion also won the Tigers-Huskies dual in the Section 1AAA final and advanced to the state tournament.

“The first (match) is important,” Goodnature said, of the season series.

Currently, the Huskies are ranked No. 3 in Class AAA while the Tigers are No. 6. The Tigers have seven individual wrestlers ranked in the state’s top 10 and the Huskies have six. Both teams are talented at every weight class, though.

“They’re very solid,” Goodnature said, of the Huskies. “They’ve got good balance and are well coached.”

The Huskies are led by 112-pounder Nick Scheffert, the 2010 Class AAA runner-up. Scheffert will face the Tigers’ Garrett Wangsness hoping to earn the Huskies a six-point fall.

The Tigers will look to do the same at 103 pounds, where Garrett’s brother, No 8-ranked Dakota Wangsness will face Brenden Buryska and could notch six points as well.

“It’s going to boil down to bonus points and either getting them or giving them up,” Goodnature said. “That’s going to be very important.”

The match of the night may be at 160 pounds where the Tigers’ No. 3-ranked Cory Hansen takes on No. 5 Jordan Zeman.

Two top 10 wrestlers also match up at 189 pounds where the Tigers’ No. 7-ranked Conner Kortan challenges No. 2 Coyte Kuefner.

Goodnature said wrestling at home does give the Tigers some advantages but the Huskies, like most teams, are road-tested.

“Wrestlers are used to competing in big tournaments away from their school and don’t have many home matches,” he said. “But you definitely want to be wrestling at home.”

He hopes that fans pack the high school gym to enjoy an exciting dual.

“It’s going to be a great match,” Goodnature said. “It’s always been a great rivalry and if you want to see great high school wrestling it’s a good one to watch.”

The dual begins at 7:30 p.m. at Albert Lea High School with the 112 pounds weight class.