Temperatures below zero on Friday didn’t keep about a dozen kids with Albert Lea’s Youth For Christ from taking part in an outdoor community service project.

Starting in the morning and going for several hours, the youth — bundled up in coats, hats, gloves and sometimes multiple layers — were digging out fire hydrants covered with snow. 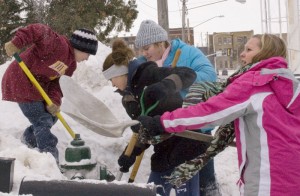 From left, Tyler O'Rourke, Katie Bliss, Emily Martin and Katie Stuart shovel out snow around a fire hydrant on Fountain Street on Friday afternoon. The group was shoveling as part of a project for Youth For Christ. -- Sarah Stultz/Albert Lea Tribune

Because of the cold temperatures, half of the youth would go and dig out a hydrant while the other half warmed up in one of the organization’s vans.

Rick Miller, City Life director for Youth For Christ, said this was an opportunity for the kids to earn scholarship money for conferences and trips.

Scholarship money comes from donations from the community and fundraisers.

In the morning, the group had cleared off hydrants from Main Street south — from the viaduct to Broadway Avenue. In the afternoon, they worked from Main Street north in various neighborhoods.

Right after lunch, Miller estimated the group would be able to dig out about 50 hydrants. They had hoped to focus on less privileged areas of town.

“We wanted to think of something to benefit the community,” he said.

The goal of the City Life program is to help youth be more well-rounded and to be good citizens.

Miller said when he was younger, he cleared snow off of hydrants one winter as part of an Eagle Scout project in Clarks Grove.

“We’ve learned to help everyone around the town,” said participant Emily Martin.

“It helps the community a lot,” participant Katie Stuart added. “If there’s a fire, firefighters wouldn’t have even had time to save them.”

According to city staff, there are about 1,300 fire hydrants within the city of Albert Lea.

“A fire doubles every one to two minutes — the less time we have to take to find and dig out the hydrant, the quicker we can put out the fire and save property and lives,” said Capt. Mark Light in a news release.