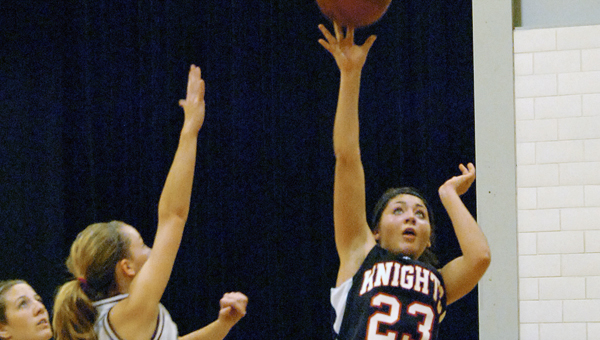 Alden-Conger’s Ariel Keller (23) attempts a layup during the first half Thursday against Medford at Alden-Conger School. The Knights beat the Tigers 66-60 in the back and forth game. -- Jon Theuer

“It was a good win for us,” Knights (5-4, 1-3 Valley) head coach Gary Newman said. “The girls really played hard. We got up and down the floor. At times we didn’t take care of the basketball very well but at the end it was still 66-60.”

Things didn’t start out well for the Knights.

“We came out and we saw some different looks in that first half,” Newman said.

In the second half, Medford kept things close and at one point took a 52-51 lead with an Alicia Ahlf free throw.

“If we take care of the basketball and look for good shots, good things are going to happen,” Newman said. “We talked about that all year and we did that.”

Martin and Ariel Keller both played key roles down the stretch for the Knights.

Martin had 13 of her 24 points in the second half, while Keller had nine of her points coming in the final minutes.

Along with Martin and Keller, Karina Skov also finished in double figures with 10 points.

Medford was led by Nicole Morgan, who scored 18 points.

As a team, Alden-Conger shot a blistering 56 percent from the field, and shot 11-of-26 from the free throw line.

The Knights also had 37 total rebounds and recorded 12 steals.

“If we play good defense, rebound and get going down the floor, we’re going to make things happen,” Newman said.