Knockin’ around with Bruiser 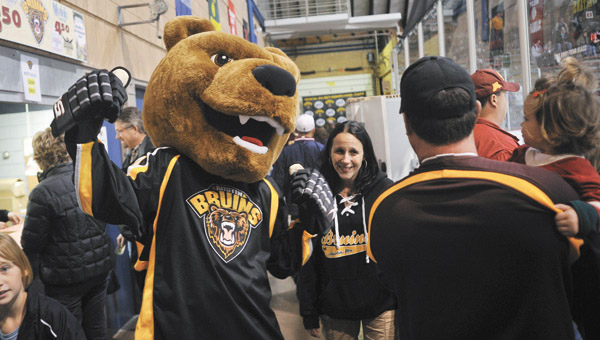 Bruiser, the face of the Austin Bruins, plays around with fans at the NAHL team’s first ever home game at Riverside Arena. -- File photo/Albert Lea Tribune

AUSTIN — Anybody who claims a team as their favorite will know that aside from playing well, you need a memorable mascot.

The Minnesota Vikings have Ragnar, the Philadelphia Phillies have the Phillie Phanatic, and even back in the day I can remember eagerly attending an Augustana basketball game just so I could set eyes on Auggie Doggie.

For the Austin Bruins, Austin’s new NAHL team that began play just this year, that face is Bruiser — the towering bear that wanders and skates around Riverside Arena on game nights.

Described by Melissa Tok, manager of business operations for the Bruins, as the organization’s lead singer, Bruiser does his best to make as many events as possible.

“We send Bruiser to an event that he’s welcome to,” Tok said. “He likes to go and give kids at the events high-paws, get people excited about hockey.”

As bears go, Bruiser is about as gentle as you get, but it doesn’t mean he doesn’t promote as much excitement as possible, especially with kids at the games.

“Sometimes can get (kids) to run up and down the bleachers,” Tok said. “He even has one girl that follows him where he goes.

I recently had the opportunity to sit down with the face of the Bruins just to ask him some questions about his roll within the Bruins.

EJ: How did Bruiser get recruited to be the face of the Austin team?

Bruiser: Word spread around town the organization was in dire need of a mascot. Friends volunteered me to the Bruins staff, and it just happened.

EJ: Any pressure being the mascot for a first year team?

Bruiser: Yes. Any time you’re on a stage to perform, there is at least a bit of pressure and expectations. Once you get suited up, you transform into a whole new creature.

EJ: What do your duties entail, at the game and out in public?

Bruiser: Anything you can do to make people happy. Bruiser is out there to help people enjoy the game, get people to buy a ticket and keep coming back. At every public appearance many kids will tell me that they’ve been to a game in an enthusiastic voice. If you’re making people happy, Bruiser is doing his job.

EJ: Did Bruiser train for this kind of job?

Bruiser: Moved hibernation to summer time. But really, no real training. You just learn from your mistakes.

EJ: People know how to achieve something like playing for the Bruins. What do you tell people if they want to be a mascot?

Bruiser: It takes an enthusiastic individual. One can’t hold back and sit back and watch a game. You are part of the entertainment.

Owner, Craig Patrick, has brought such a great idea to this town. He has put 110 percent into this organization. He has put a great team and staff together, fixed up Riverside Arena, and does a great job promoting the Bruins. The people of Mower County should be thankful. And don’t be scared to give Bruiser a high five.