The funeral service for Lola Matson of St. John’s Lutheran Home, Albert Lea, will be at 11 a.m. Wednesday at Hayward Lutheran Church, Hayward. The Rev. Katie Fick will officiate. Interment will be in Hillcrest Cemetery. Visitation will be from 5 to 7 p.m. Tuesday at Bonnerup Funeral Service, Albert Lea and one hour before the service at the church. 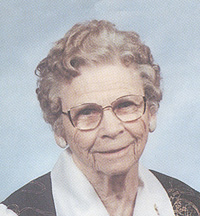 Lola was born Aug. 20, 1911, in Janesville, to Joseph Daniel and Belle (Cohen) Savage. She graduated from Janesville High School in 1930 where she also played basketball. Lola married Roy William Matson in January 1934. They began their lives together on a 40-acre peat slough farm adorned with a tar-papered shack. It was in Hayward Township northwest of Hayward and was owned by Dr. Frank W. Calhoun. They raised a few vegetables and husband, Roy, hauled gravel with his one truck fleet. They moved to a farm two miles north of Hayward in 1936 and the economy was getting better. The vegetable farming and trucking grew bigger and better. Working with family she saw the development of Matson Truck Lines, Inc., Ace Transportation Co., Inc., Matson Truck Lines of Indiana, Inc., Freeborn Construction, Inc., Taxi, Inc. and Matson Bros. Crane Service. On July 28, 2000, she moved from her home into St. John’s Lutheran Home in Albert Lea. Lola was a member of Hayward Lutheran Church and Sarah Circle. Lola belonged to the Hayward Senior Citizens group, enjoyed playing bingo and scrabble, growing flowers, watching quiz shows like Jeopardy! on television and writing letters to others. Her home was always open to ‘one & all’.

Memorials can be given to St. John’s Foundation or Hayward Lutheran Church or a Charity of personal choice. Our memories of her will live on.