Mary Margaret Klocek, 91, of Wells, died Sunday, Jan. 9, 2011, at the Shepherd’s Inn in Wells. Mass of Christian burial will be held Thursday at 10:30 a.m. at St. Casimir Catholic Church in Wells. Visitation will be from 4 to 7 p.m. Wednesday at Bruss-Heitner Funeral Home in Wells with a 7 p.m. prayer service, and visitation will continue one hour prior to the service at the church on Thursday. The Rev. Mark McNea will officiate and burial will be in St. Casimir Cemetery, Wells. Arrangements are with Bruss-Heitner Funeral Home in Wells. Memorials are preferred to: The Shepherd’s Inn – The Shepherd’s Garden, c/o Bobbi Richards, 46 1st Ave. SW, Wells, MN 56097. 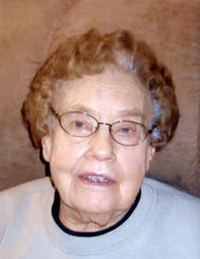 Margaret was born Aug. 13, 1919, in Minnesota Lake, the daughter of John and Agnes (Osdoba) Latusek. She first married Raymond Chirpich, who preceded her in death. To this union, two children were born. On Jan. 28, 1947, she married Felix L. Klocek in Wells. Margaret was a homemaker and a member of St. Casimir Catholic Church and the CCW. She enjoyed crocheting, knitting, quilting, playing cards and travel.

She was preceded in death by her husband, Felix, in 1998; her brother, Phillip Latusek; daughter-in-law, Maureen Klocek; son-in-law, Manny Ferri; and her parents.