Maxcene H. Henle, of Green Valley, passed away on Jan. 18, 2011, at Casa Theresita Hospice in Tucson.

She was born near Northwood, Iowa, on Nov. 4, 1920, to Robert and Anna (Lau) Ewald. She lived with her aunt and uncle, Marshall and Martha Lindquist, in Kensett, Iowa, so she could attend high school. In high school, she played the flute and later took steel guitar lessons. She was in a play called “Mickie’s Maker,” and because of her great performance, from that day on she was called “Mickie” by all her friends and acquaintances. To her family she was “Toodie.” 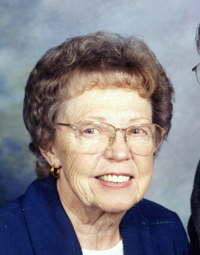 She moved to Albert Lea, and she was worked as a maid for Mr. and Mrs. Bruce Wulff. She also worked at Rex Cafe. She met Fremont Henle, the city bus driver, and they dated until he left for California to work for North American Aviations. She went to California on Sept. 17, 1941, and they were married 10 days later in Inglewood. She worked in the office at Hartwell, an aircraft manufacturing company, in California. She later worked at retail shops.

Maxcene and Fremont moved to Green Valley in 1994 and enjoyed traveling in their travel trailer with their two dachshunds. After Fremont’s death in 2002, she moved into a villa until she entered hospice care in June 2010.

She was preceded in death by her husband; parents; two brother-in-laws: Kenneth Williams and Paul Grasdalen; and nephew, David Williamson.

A special thanks to Casa Theresita Care Center in Tuscon for their tender, loving care. She thought it was a special place, and she was very happy to live there.

She was a member of Our Lady of the Valley Catholic Church in Green Valley. Services were held at Adair Dodge Funeral Chapel in Tuscon on Friday, Jan. 28, 2011. Interment was at Holy Hope Cemetery. Correspondence may be sent to Gary Henle, 316 S. Paseo Pena Apt. C, Green Valley, AZ 85614.