Funeral services for Merlin Oden Carlsgaard, 82, of Rockwell, Iowa, and formerly of Myrtle, will be held at 10 a.m. Saturday at Bethlehem Lutheran Church. The Rev. Ronald Myers and Rev. Joel Dahlen will officiate. Interment will be at the State Line Cemetery. Visitation will be from 5 to 7 p.m. Friday at Bayview/Freeborn Funeral Home and one hour prior to the service at the church. To sign the guest book, go to www.bayviewfuneral.com. 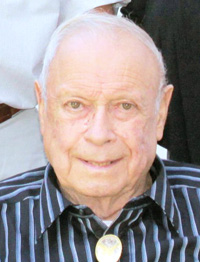 Merlin was born to Arthur and Beatrice (Odden) Carlsgaard in Freeborn County on July 19, 1928. He attended various country schools as his folks moved. He went to Albert Lea High School. He was confirmed at Hayward Lutheran Church and later joined Bethlehem Lutheran Church, Myrtle. He married Marjorie (Chrs) on June 17, 1948. To this union six children were born. They lived in this area for 58 years then because of health issues they moved to Rockwell, Iowa. The first years of their marriage Merlin farmed and later drove a gas truck for Freeborn Coop Oil Co. for 15 years. He was proud to have earned a safe driving award each year of his employment. Merlin then went to work for Streater Industries where he worked for 25 years until his retirement. He was a member of Bethlehem Lutheran Church, the Carpenters and Joiners Union 766, the Moose Lodge 1703, Senior Citizens of Hayward and Senior Citizens of Rockwell. Merlin liked horseback riding, hunting, fishing and traveling.

Merlin was preceded in death by his parents; wife, Marjorie; sister, Joan Casey Back; brothers: Arlen and Gerald (Jerry); brothers-in-law: Amos Farr and Bill Back; and nephews: Thomas Casey and Robert Carlsgaard.