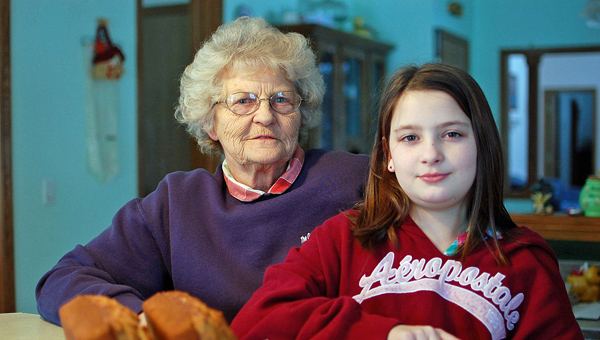 A growing number of grandparents are raising their grandkids. In Bemidji, Gail Lauderbaugh, 71, took in her 11-year-old granddaughter Nikki and her two siblings back in 2000. Lauderbaugh says raising children as a senior citizen is challenging, but rewarding. -- Tom Robertson/MPR News

But for the past 10 years, Lauderbaugh has raised three grandkids — 15-year-old Kevin, 12-year old Stephanie and 11-year-old Nikki.

Lauderbaugh, 71, and her husband, Larry, 73, took in their three grandchildren after their daughter-in-law was murdered in 2000. The couple’s son never took responsibility for the children, so the duty fell to them. For a senior citizen, she said, parenting can be exhausting.

“It’s not the same as raising your own kids,” she said. “They need younger people involved in their lives, more than just me and grandpa.”