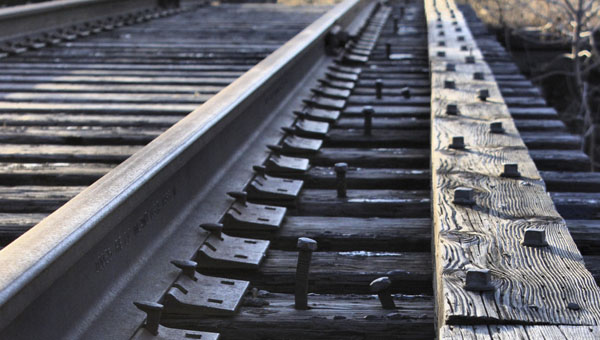 A railroad track extends into the fading afternoon light last spring near Shoff Park in Albert Lea on the Union Pacific spur to Hartland; ties are coming loose and tar seeps through the wooden beams. -- Kim Kwapick

The 12.6-mile railroad that now exists between Albert Lea and Hartland looks like it could become a walking and bicycling trail in coming years.

Freeborn County Commissioner Dan Belshan said the county has received a letter from the Union Pacific Railroad stating its intentions to file with the U.S. Surface Transportation Board in March for abandonment of the route. 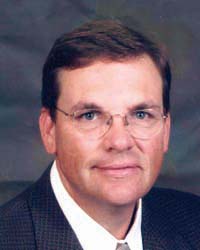 For at least a couple of years, white signs at crossings have indicated the Albert Lea-to-Hartland line is exempt, which means the line is unused and school buses and other vehicles required to stop do not have to stop.

The Freeborn County commissioners met Tuesday with officials from cities in Freeborn County and with Joel Wagar of the Minnesota Department of Natural Resources to discuss regional bike-trail efforts.

Belshan said Freeborn County has sent the Union Pacific a letter expressing its interest in acquiring the route as a multi-use trail.

He said he hopes that the county can acquire the route with grant funding.

“Our goal is to not use property taxes to pay for the trail,” Belshan said.

Grant applications would call for a name of the trail. Belshan said a name being used is the Bent Tree Trail.

Wagar said federal rules for rail abandonment seek to preserve corridors by moving them into the hands of government.

“In the future, it is possible the corridor could be used as a railroad again, even if it existed as a bike trail or some other use,” Wagar said. 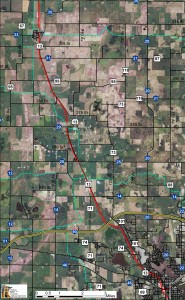 This Freeborn County map shows the railroad to Hartland in red. The stretch proposed for abandonment goes from just south of Hartland to the heart of Albert Lea.

The term for this is “rail banking,” he said.

In the 1970s, many rail corridors were sold off when railroads went out of business, prompting concerns about the difficulty railroads and governments would face with land acquisition should the day come that more rail traffic was needed in America. Rules for rail abandonment came out with the Staggers Rail Act of 1980, which otherwise significantly deregulated the railroad industry to even the field with the trucking industry.

There are two ways to go about federal rail abandonment procedures. For stretches of railroads that have not had traffic for two years and possess alternate routes — which would include the Albert Lea-to-Hartland line — the procedure has a 50-day schedule after filing before it becomes subject to conversion for public use, such as a trail. Railroad tracks, ties and even the crushed rocks are salvaged but bridges are left so the route remains in tact.

Factors for the cost of the acquisition remain to be seen.

Belshan said the county hopes to apply to the Minnesota Parks and Trails Legacy Grant Program, which is funded through the Outdoor Heritage Fund. The Outdoors Heritage Fund receives 33 percent of the sales tax revenue from the Clean Water, Land and Legacy Amendment, approved by voters in November 2008. The amendment set a sales tax and use tax of three-eighths of 1 percentage point (0.375 percent).

That funding source would pay up to 75 percent, though probably more like 50 percent. However, the remainder could come through applying to another source, such as the Federal Recreation Trail Program.

The proposed route for the Hartland-to-Albert Lea abandonment, according to maps handed out at the meeting Tuesday, would go from near 305th Street just south of Hartland to near a junction with the UP “spine line” that runs through Albert Lea. That junction is near the West Seventh Street and South Broadway Avenue corner.

The route would cross Front Street, where the city intends to paint a bike lane this spring. Bike riders could get from the Blazing Star Trail, which ends at Frank Hall Park, to the Bent Tree Trail by riding down the Front Street bike lane.

The Dakota, Minnesota & Eastern owns the railroad from Hartland northward to Waseca.