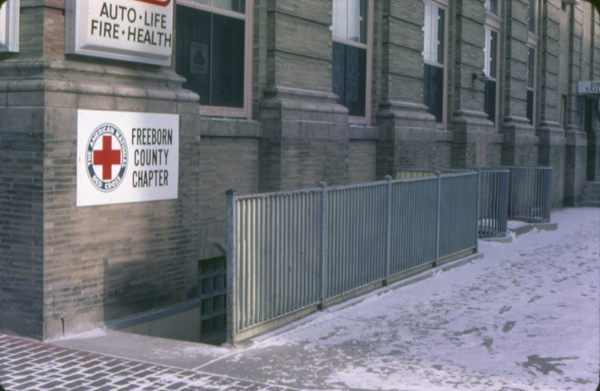 In 1980 the Freeborn County Chapter of the American Red Cross had its office in the basement of what was once the First National Bank. Outside access to this office was by a stairway that was set off by a railing. In the winter months the stairway was a real challenge for snow and ice removal. At one time there were five of these railings next to buildings in the city’s central business district. Four, including this one facing East William Street still exist, but none are now used for offices or business ventures.

Editor’s note: This is the seventh in a series.

Preserving memories of the past was one of the goals for the late Bidney Bergie. Thus, from time to time he used his camera to take photos of local business firms and scenes. Then the man who earned the title of “Mr. History” would develop the films in his home’s darkroom and later convert the results into small slides. Sometime later he might use some of the slides for one of his popular slide shows presented at local organizations and for special events at the museum, located next to the Freeborn County Fairgrounds entry on North Bridge Avenue.

Another goal Bergie had in mind with his slide shows was to revive memories for people in the audience. Some of his photos were of eating places, grocery and hardware stores, department and specialty stores, service stations and garages. People seeing these scenes could easily recall visiting these various places. Also, through the years many of the business places have been replaced with other ventures or the buildings have been torn down.

For Bergie, the slide shows he presented with his own projector and screen had a real bonus. His programs were always rather informal. Thus, sometimes a scene shown on the screen would result in a discussion with audience members. As a result, even more local historical information might become available.