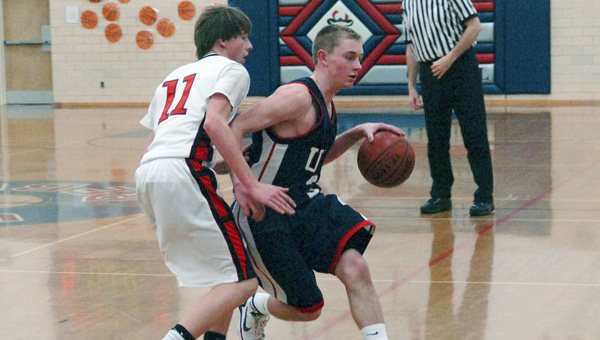 The Rebels shot 33 free throws in the game, 30 of those coming in the second half.

“It was a battle,” Rebels head coach Rob Stevermer said. “Both teams played hard and both teams got after each other. We were fortunate in that second half to get the tempo going our way. We pounded the rock inside a little bit and got ourselves to the free throw line. Really that’s a blue print for our success. If we can play good defense on one end and get the ball inside and get to the foul line usually things will go in our favor.”

For the Panthers, fouls and turnovers ended up being a key that held them back down the stretch.

The Panthers had 22 turnovers in the game, while the Rebels were already in the bonus with 10 minutes and 48 left in the second half.

The Rebels ended up shooting 16-for-33 from the free throw line, while the Panthers went 7-for-10.

In the first half, the Rebels defense kept the Panthers at bay as both teams struggled shooting the ball.

In the second half, the Panthers started with a 7-3 run that shrunk the Rebels lead to three at 24-21.

Over the next several minutes, the Rebels pounded the ball inside and went to the free throw line 10 times as USC outscored the Panther 16-8 to jump out to a 41-31 lead.

The Rebels were led by Cole Stencel and Riley Niebuhr who scored 10 points apiece.

USC is back in action on Tuesday as they host the Blooming Prairie Blossoms, while NRHEG is off until Thursday when they travel to Waterville-Elysian-Morristown.