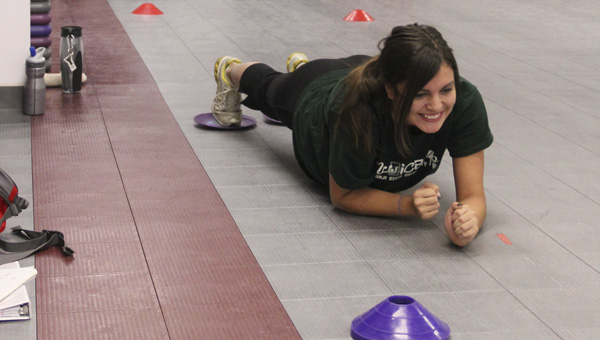 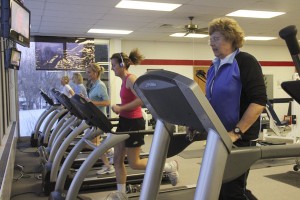 The treadmills were nearly filled up Tuesday evening as people worked out at the Albert Lea Family Y. -- Michelle Haacke/Albert Lea Tribune

About 40 people were kicking and slicing through the pool during swimnastics class. Another 10 people were in the aerobics room, running and crawling their way through boot camp class. The cardio and weight rooms have been buzzing with activity all week, as well.

The start of the new year is recognized as a new beginning, hence, the notorious New Year’s resolutions. Self improvement is one of the top resolutions made by people every year, and several local organizations see spikes in activity each January because of it.

“We usually get more calls and interest in joining from December through the first of January,” said Albert Lea Family Y Executive Director Dennis Dieser. “We see a lot more of our current members get active, too, and usage in the facility is greater.”

“It’s definitely the first half of January when I get many calls every day with health questions,” she said.

According to Pleimling, people tend to say they want to start dieting, however, that doesn’t necessarily mean they want to lose weight. She gets many questions about controlling diabetes and lowering cholesterol, as well. 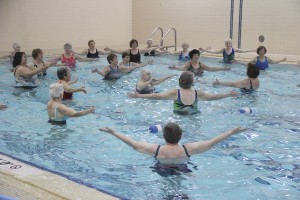 This year, Pleimling plans to implement an ongoing program, which will kick off in January, to promote healthy habits for life.

“The bottom line is to incorporate foods good for us and eating more foods with more health value — getting more bang for our buck,” she said.

“Companies like Weight Watchers offer special joining rates, but I think it’s in their heads to do it,” said Held. “The new year comes, they want a new lifestyle and it’s a good time to do this.”

Weight Watchers focuses on behavior change in all aspects, including exercise, eating habits, types of foods you eat and how you live your daily life in general. While new members start with great gusto, Held said it’s not uncommon to see members plateau and efforts begin to wane by March.

“Mostly we tell them to think back to their first day, what were their goals, why was this important to them, and try to reestablish that enthusiasm,” she said.

Dieser said at the Family Y, they notice activity slows down close to the summer months. As memberships expire and the weather gets nicer, people begin to go outdoors for their workout.

Keeping things fresh, Dieser said, is one way to combat waning resolutions and slower usage at the facility. He said the Y will get their new spin bikes in next week, and the Zumba classes have been very popular, too.

“If you do the same thing every day, it leads to getting bored,” he said. “Variety is key.” 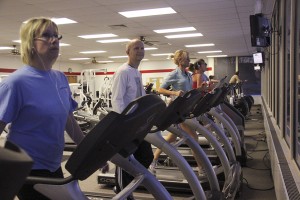 Several people got a cardio workout out on the treadmills at the Albert Lea Family Y Tuesday evening. -- Michelle Haacke/Albert Lea Tribune

He also said jumping into things too quickly after getting started can be detrimental to establishing a routine.

“Say they haven’t worked out in long time and then they come in and do too much too quickly, instead of easing into it as a slow process, they will get too sore and it will turn them off from returning,” he said.

Held said the best advice she gives others is to get peer support.

“To give each other pats on the back, to hear someone say I know how you feel and share that empathy really makes a difference,” she said.

Dieser agreed. He said people who work out with others will continue to stay with programs longer than those who don’t because of the social interaction. Those who use personal trainers tend to stick with it longer, too.

“I think the important thing is staying steady, working out with somebody and finding a program or activity they like,” he said.