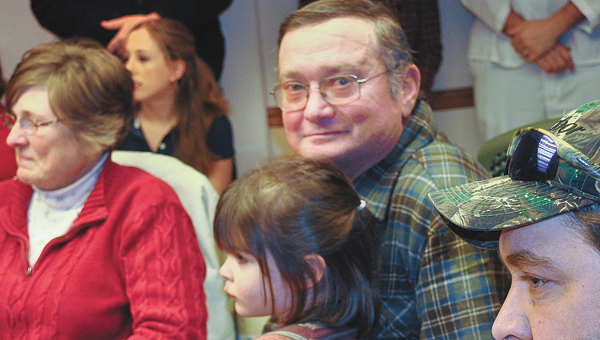 AUSTIN — Tom Branden jokes that he has two birthdays.

While his first comes each year in the obvious fashion, the story behind his second celebration of life is arguably more intriguing.

On Oct. 22, Branden went into cardiac arrest while working the final leg of his shift in Hormel Food’s grocery division. His life was spared when a team of nine co-workers came to his rescue, reviving him with the use of an automated external defibrillator.

Branden came together Tuesday at Austin’s Hormel Plant with his rescuers, all nine of whom were awarded Heartsaver Hero Awards from the American Heart Association during a midday presentation.

In a tearful address to those who saved his life, Branden expressed his gratitude with two simple words that, to him, carry more meaning now than ever before.

“I’d just like to say thank you.” he said. “That’s basically all I can say right now.”

Branden, a Hormel employee of 26 years, was saved by one of 14 AED units installed around Hormel’s Austin Plant. With 150 employees trained in the use of the defibrillators, the move behind Branden’s rescue was swift and effective. A group of supervisors responded to calls that Branden was down and quickly began to administer CPR, while others notified local emergency responders and Hormel’s in-house medical team. The AED unit, designed to sense cardiac rhythms and administer shocks when needed, went to work on Branden and has been credited for sparing his life. Branden was taken to Austin Medical Center, and was then transported by helicopter to Mayo Clinic in Rochester.

Branden said he doesn’t remember anything from the day the heart attack happened until the Monday after his recovery.

But that’s not the case for his co-workers, who remember the day down to the detail.

Joe Gunderson, a supervisor in Branden’s division, said nothing about that Friday was out of the ordinary.

“I saw Tom and talked to him a couple of times that day,” he said.

That smooth Friday changed when Gunderson learned Branden had gone down. Gunderson, along with co-workers, contacted emergency responders and followed their recent training practices.

Anna Good was one of the supervisors who took part in the rescue. Having attended first aid classes just days before the rescue, she said she went into emergency mode.

“Once you see an event like that, you just do it,” Good said.

While all those who responded learned an important lesson that day, they say the most rewarding part of it is seeing Branden alive today.

As for Branden, he’s just thankful he was given the opportunity to thank those who came to his rescue.

“You see a lot of things in different ways,” he said. “Life can leave you in a hurry. Luckily Hormel Foods had everything there.”

Because of that, Branden and his family have been taking things slow, making sure that even the simplest of life’s delights are savored.

“We appreciate life better,” said his wife, Sandy Branden. “We take one day at a time.”

City not surprised by GOP cuts