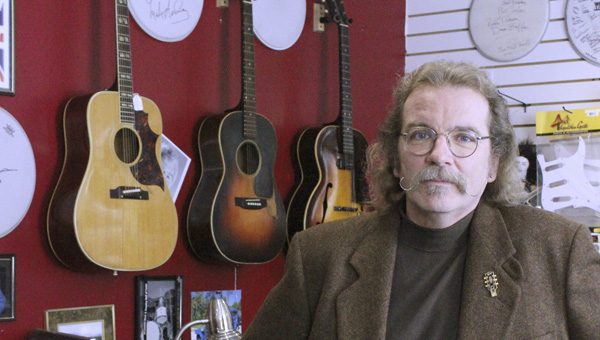 Giving locals the opportunity to shop close to home and keeping music alive in his hometown are just two goals Merle Krause hopes to achieve by opening Marshall Street Music.

Merle and Brandon Krause worked behind the counter together on Friday at the new Marshall Street Music shop in Albert Lea. -- Michelle Haacke/Albert Lea Tribune

It carries new, used and vintage instruments along with instrument accessories.

Krause decided to open the store after Tone Music, which he had managed, closed its downtown Albert Lea store last April. The only music store in Albert Lea, Krause is glad to fill the void left after Tone closed.

“This town has never been without a music store,” he said. “The whole time we were closed people were stopping me, wondering when we were going to open another store.” 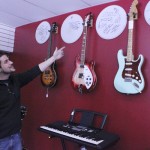 Brandon Krause shows off some of the drum heads, signed by well-known musicians, hanging between the electric guitars along a wall of Marshall Street Music. -- Michelle Haacke/Albert Lea Tribune

Krause already owned a building, the one that houses the Lighthouse Event Center upstairs, so his decision to open Marshall Street Music and move Legacy Studios onto the main floor just seemed natural.

Because all are housed under one roof, he and his son, Brandon, are able to offer up a variety of services through the shop and the recording studio, including rentals of public-address systems and instruments, music lessons and mobile or studio recording. Repairing and rebuilding instruments and re-coning speakers are their other specialties, which also promote recycling.

Krause has the capabilities to transfer music from vinyl to CDs and will purchase or consign vinyl records.

The store itself is relatively small, with several acoustic and electric guitars and guitar accessories. Drum sets are assembled in the space across the hall, which is often used as a party-rental type area. But don’t let this deceive you. 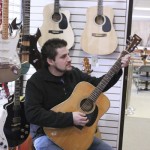 “I don’t have everything; we’re not a superstore,” Krause pointed out. “But I have ways of getting everything you want. I have friends in the business all over.”

Krause said because he is building the business up, brick by brick, instead of blindly ordering a big inventory without knowing the demands, he would rather wait and see what types of things people seek. Just because you don’t see a rack filled with sheet music doesn’t mean Krause can’t get it. He orders new merchandise each week, so people can get their items quickly.

Krause realizes that many people shop for these types of things on the Internet, but he said he can offer service after the sale, which Internet shops cannot do. 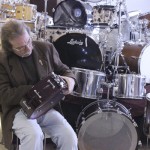 “If you have a problem, we’re here to help and take care of it,” he said. “We can teach you the do’s and don’ts once it’s in your hands.”

Because he works with his son, Krause said they can get in tune with people across generational boundaries, which is another advantage to his business.

He said so far, reception to the new shop has been good in the community.

“People like that they don’t have to drive to Mankato or Austin or Rochester or the Cities to get their guitar strings,” he said.

Just as important for Krause, who’s had a lifelong passion for music and plays the drums, is to keep music alive and well in the community. He remembers when there were so many local music venues that musicians could play each place in Austin and Albert Lea and not play the same place twice in the span of a month.

“I grew up in the local music stores, and it really gave me the values I have today,” said Krause. “To come back and be the music man is pretty cool.”

SUV falls through the ice