Theodore Lee “ Ted” Carlson, 82, of Wells, died Tuesday, Jan. 25, 2011, at Parkview Care Center in Wells. Funeral services will be held at 11 a.m. Saturday at the United Methodist Church in Wells. Visitation will be from 4 to 8 p.m. today at Bruss-Heitner Funeral Home in Wells and will continue one hour prior to the service at the church on Saturday. The Rev. Paul Woolverton will officiate and burial will be in Rosehill Cemetery in Wells. Bruss-Heitner Funeral Home in Wells is assisting with arrangements. 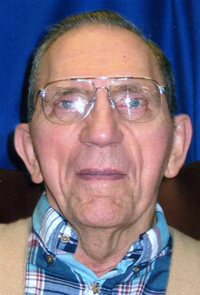 Ted was born Aug. 1, 1928, in Wells, the son of Arthurlee and Marie (Bates) Carlson. Ted graduated from Wells High School in 1946. He played football, basketball and participated in the class plays. On Sept. 10, 1950, he was united in marriage to Janet Hansen at First Lutheran Church in Albert Lea. Ted was a third generation owner of Carlsons’ Motor Electric. He was master of Doric Lodge No. 87 AF and AM and honorary member; past president of the Wells Chamber of Commerce for two years; lifetime member of and held several offices at the United Methodist Church; and was a board member for the Wells Public Utilities. He was also a Worthy Patron of Ruby Chapter, Order of the Eastern Star. He was also a member of: Big A Auto Parts National Advisory Council, Tri-City Sewer Board, Wells Jaycees, the Wells City Council, Wells Lions Club and the Wells Golf Club. Ted was a lifetime resident of Wells. For the past three years he was a resident of Parkview Care Center, where he received exceptional care and enjoyed bantering with the aides and nurses. Ted enjoyed taking winter breaks in Arizona and spending time with friends on Labor Day weekends. He loved bragging about his grandchildren.

He was preceded in death by his parents; son, Brad Lee, in 1973; parents-in-law; two brothers-in-law and two sisters-in-law.