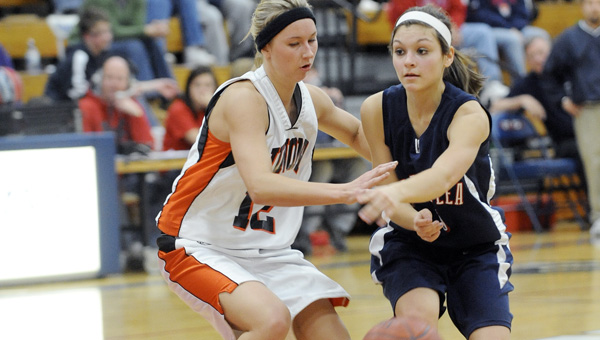 Down 33-18 at halftime, Albert Lea’s Alyssa Sager scored 17 second-half points Friday and pulled the Tigers even with the Winona Winhawks with a game-tying 3-pointer with 8 1/2 minutes left in the game.

On the following Tigers possession, Sager knocked down a 3-pointer to tie the game 48-48 before the Winhawks’ Ellen Blacklock scored off an offensive rebound to pull Winona back on top 50-48.

With 6:30 left in the game, Brittani Zuniga passed to Friehl for a baseline 3-pointer to give the Tigers their first and only lead of the game.

The Winhawks then scored six unanswered points and finished the game on a 10-7 run.

Sager made 12-of-16 free throws and grabbed a team-high eight rebounds to go along with a game-high 22 points.

“She was going inside and creating contact,” Tigers head coach Sean Gillam said, of Sager. “She needs to be the one who scores for us but we also need others to step up and take shots.”

“Brittani had a good game tonight,” Gillam said. “She did a lot of the little things. She has really stepped up for us as a junior and is a positive leader on the court.”

The much taller Winahwks had little trouble scoring in the paint and were led by Blacklock with 18 points and 18 rebounds.

The height disadvantage gave the Tigers trouble on the offensive end, too.

“We have to pull up short and and realize the bank shot is sometimes just as good as a layup,” Gillam said.

The Tigers scored most of their points off turnovers and on fast breaks and struggled inside the 3-point line, making 12-of-72 two-point field goals. The Tigers did make 6-of-12 3-pointers and shot 16-for-22 from the free throw line to stay in the game.