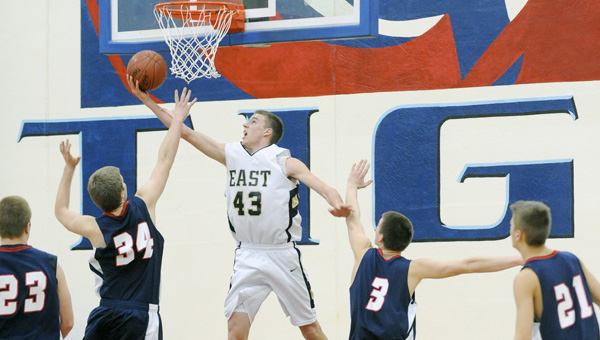 In a Big Nine Conference with the most parity its seen in years, the Albert Lea Tigers boys’ basketball coaches expect each game to be close.

As was the case Friday as the Tigers trailed the Mankato East Cougars by only three points in second half but lost 66-54.

“We knew we were going to give ourselves and chance and we did,” Tigers head coach Lucas Kreuscher said. “We’ve got to take that next step. If we’re down we need to learn how to climb across, get the lead and hold onto it.”

After the Tigers’ Alik Smed made the backend of two free throw attempts, Tyler Wichman penetrated and fed Cameron Solie who knocked down a 3-pointer to pull Albert Lea within 13-6.

On the following possession, Kyle Ooms putback a Josh Eisenbraun miss to complete a 6-0 run and pull the Tigers within 13-8.

But the Cougars answered, something they did all night, and scored consecutive layups to pull back ahead 17-8.

“We went on some runs,” Kreuscher said. “But we need to take those runs and continue to stay with them.”

Solie putback Smed’s missed 3-pointer before Smed knocked one down on the next possession to pull within 17-13.

The Cougars’ Brandon Sedivy made a free throw but Wichmann and Aaron Klatt scored back to back layups to pull the Tigers within one point at 18-17, the closest they come to the Cougars the rest of the night.

Ooms led the Tigers with 17 points and 10 rebounds, while Klatt chipped in 13 points and 11 rebounds.