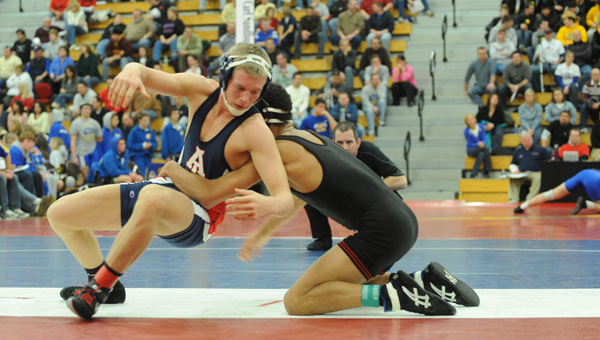 Dalton Westerlund looks to pull a reverse Friday at the Clash meet in Rochester. -- Andrew Dyrdal

The Tigers sandwiched a dramatic come from behind win between two losses during Day 1 at the Clash.

After falling to No. 1-ranked Carl Sandburg, Ill., 53-10 in their opening-round match, the Tigers faced another top-ranked 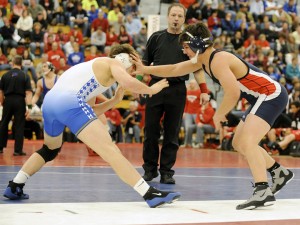 opponent, the Broomfield Eagles, the No. 1-ranked team in Colorado and two-time defending state champions.

By random draw, the match began at 119 pounds, pitting Lucas Hansen against the Eagles’ Phil Downing.

Downing pinned Hansen in 42 seconds and began a flurry of scoring for the Eagles as they strung together three falls to build an 18-0 lead over the Tigers.

At 135 pounds, the Eagles’ Mike Fragoso earned an 11-3 major decision over the Tigers’ Tristan Westerlund giving Broomfield a 22-0 lead heading into a likely sure-fall at 140 pounds.

But Bany Chan gave the Tigers their best loss of the season.

Facing Nick Babcock, a two-time state runner-up and ranked No. 2 in Colorado, the untested ninth-grader kept the Tigers within striking distance.

Chan wrestled a scrappy match and held Babcock to just a 10-2 major decision.

“That was huge,” Tigers head coach Larry Goodnature said, of Chan’s match. “In duals it’s all about falls and not giving up bonus points and that’s what (Chan) did.” 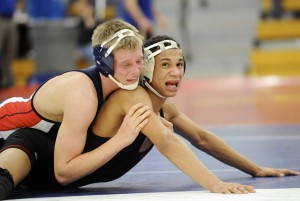 They won seven of them.

The Eagles extended their lead to 32-18 when Connor King, Colorado’s No. 1-ranked wrestler at 171 pounds, pinned Carter Kortan in 4:26.

The Tigers shutout the Eagles and scored 22 unanswered points the restof the match.

The Tigers biggest win over the Eagles, according to Goodnature, was at heavyweight, where Albert Lea’s Alex Nielsen won a 3-0 decision over Colin Eaks, the No. 12-ranked wrestler in Colorado.

Nielsen’s win pulled the Tigers within 32-31, setting up brothers Dakota and Garrett Wangsness to seal the win at 103 and 112

Dakota pinned Dylan Alverez in 3:29 and Garrett earned an 8-6 decision over Jonathan Stelling.

“They’re used to wrestling to start off the meet,” Goodnature said of the Wangsness brothers. “With all the pressure on they really stepped up.

“The win was a tribute to the kids that they never gave up. I told them, ‘Don’t let the boys in front on you get you down.’ They went out there and did it.”

The Tigers couldn’t go anywhere against the Carl Sandburg Eagles, the No. 1-ranked team in Illinois, in their opening-round match Friday.

The Eagles built a 32-0 lead before the Tigers’ Dalton Westerlund put Albert Lea on the board with a 9-1 major decision over Chris Pajak.

Carter Kortan and Gaudian also notched decision wins for the Tigers as they lost 53-10.

The Tigers third match against the No. 5-ranked Mason City Mohawks had the looks of another gutsy comeback, but Albert Lea fell just short 35-28.

Beginning at 125 pounds, the Tigers fell behind the Mohawks 22-0 before a decision and major decision by Dalton Westerlund and Cory Hansen, respectively, pulled the Tigers within 22-7.

The Mohawks rallied with a fall and a decision to pull ahead 31-7 and Tigers couldn’t find the falls they had against Broomfield.

After Gaudian pinned the Mohawks’ Tom Shiffer and Nielsen won by forfeit, Dakota Wangsness pinned Kaz Onoo to pull the Tigers as close as 31-25.

With two matches left, the Tigers needed to win match to steal the match but got only one victory from Lucas Hansen over Andrew Bartel at 119 pounds.

The Tigers beat Skutt Catholic, Neb., 47-26 in the opening round of Day 2 but individual results were unknown when this issue went to press.

The Tigers also wrestled Stewartville at 11 a.m. and Wausau West, Wis., at 1 p.m.