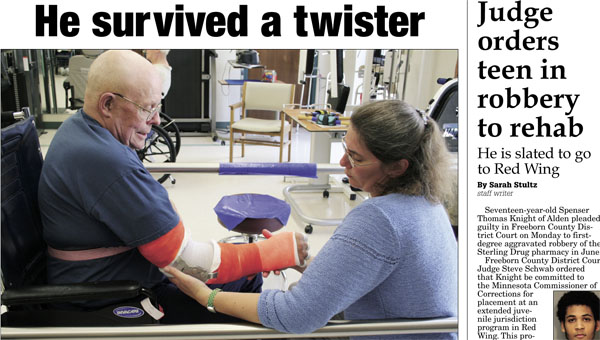 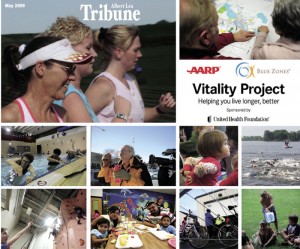 “I am proud of our Tribune family,” said Publisher Scott Schmeltzer. “They are committed to quality, and these awards reflect that.”

The entries sent in for the contest were published between October 2009 and September 2010. Excluding the Minneapolis Star-Tribune and St. Paul Pioneer Press, the Albert Lea Tribune competes against daily newspapers across Minnesota. The contest is structured differently depending on the category.

“In some categories, we go up against newspapers four or five times our size, such as Duluth and St. Cloud,” said Tribune Managing Editor Tim Engstrom. “In others, we compete against the many papers closer to our size. And there are many, from Bemidji to Winona. Bringing home nine is quite an honor.”

For the Lynn Smith Community Leadership Award, all newspapers — regardless of size or whether they publish weekly or daily — can enter, Engstrom noted.

The convention took place Wednesday, Thursday and Friday at the Sheraton Hotel in Bloomington. 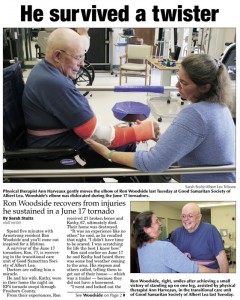 Here are the awards the Albert Lea Tribune won Thursday:

• Lynn Smith Community Leadership Award, first place. The Tribune won for its efforts in the AARP/Blue Zones Vitality Project, which wrapped up in October 2009, meeting the contest’s date requirements. A partition wall at the convention displayed the Tribune’s various stories, editorials, special sections and website content related to the Vitality Project. Among other praises, judges called it “an outstanding commitment to improving the health of the community. A great way to serve readers. Impressive use of varied platforms to connect with readers and non-readers.”

• Human Interest Story, Dailies under 10,000, first place. Reporter Sarah Stultz wrote a moving story about tornado survivor Ron Woodside, who lost his wife in the direct hit. Judges wrote, “Inspiring and heartbreaking. Explores a tornado’s impact on the local community through the tale of a man whose home was destroyed in the storm. … Stultz captures his memories of that day, his positive outlook about community support and how he comes to grips with his wife’s death.”

• Photo Story, All Dailies, first place. Photographer Brie Cohen won for images she shot of the Nov. 18, 2009, tour bus crash on Interstate 90, when she still worked for the Tribune. Judges wrote, “Unbelievable photo coverage on this! Extremely hard to take these photos and capture the real story. Outstanding job!”

• General Excellence, Dailies under 10,000, second place. This is one of the most coveted categories, because judges look at the quality of the entire newspaper. The issues entered were selected at random by the Minnesota Newspaper Association. Judges wrote, “Good visual front pages and sharp color with interesting photos and local news stories. Nice overall package.” 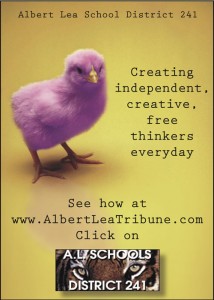 • Special Section, All Dailies, second place. On June 27, the Tribune published a 12-page special section reviewing the devastation caused by the June 17 tornado outbreak. Judge wrote, “Great section covering a very prominent event in your area. Striking photographs carry the narrative. Relating the event to a similar one in the area’s past creates another link to residents who lived through both. Use of the radar timeline was also a nice addition that told the story in another fashion.”

• Use of Color in Advertising, Dailies under 10,000, second place. Stacey Bahr won this award for an advertisement she created for the Albert Lea School District. Judges wrote, “What a fun ad! The purple chick really helps deliver the message that the school is trying to send about independent and free-thinkers.”

• Local Breaking News Coverage, Dailies under 10,000, second place. Tribune staff members Tim Engstrom, Sarah Stultz, Kelli Lageson, Geri (Murtaugh) McShane, Scott Schmeltzer, Andrew Dyrdal, (intern) Janet Lawler and Austin Daily Herald staff members Jason Schoonover and Eric Johnson all contributed to this award. It was given for the Tribune’s coverage in print and online of the June 17 tornado outbreak. Judges wrote, “Solid multimedia coverage of devastating storm while under duress. This is professional journalism at its best. Tribune staff should be proud of themselves!”

• Use of Photography as a Whole, Dailies under 10,000, second place. The issues entered were selected at random by the MNA. Judges wrote, “Nice local images.”

• Editorial Page as a Whole, Dailies under 10,000, second place. The issues entered were selected at random by the MNA. Judges wrote, “The most local content of all the entries.”