Funeral services for Vernon Jacob Hinkley, 98, of Albert Lea will be held at 1:30 p.m. Sunday at Bayview/Freeborn Funeral Chapel. The Rev. Cherie Daniel and Rev. Kent Otterman will officiate. Interment will be at the Freeborn Cemetery. Visitation will be one hour prior to the service. To sign the guest book, go to www.bayviewfuneral.com. 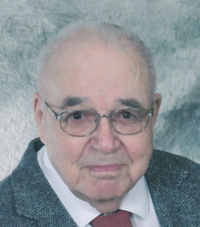 Vernon Jacob Hinkley was born on June 20, 1912, to George W. and Julia M (Jacobsen) Hinkley. He graduated from Freeborn High School in 1931. Vernon worked for his father until 1935 when he became a garage owner and automotive dealer from 1935 to 1988 (53 years). On Jan. 7, 1937, Vernon was united in marriage to Alice Collins in Gordonsville. Vernon worked in Alaska for 14 months (1943-1944) for the USED. Through the years, Vernon was a very active community member, serving on the Freeborn Boosters, was a charter member of the Freeborn Fire Dept., Freeborn City Council and served as the mayor of Freeborn from 1957 to 1964. He was also a member of the Masonic Lodge in Wells. Vernon loved music and played in the Freeborn High School Band, Freeborn Town Band and the Alden City Band. His outside interests included fishing and watching sports.

Vernon was preceded in death by his parents; daughter, Lois Campbell in 1995; sons-in-law, Robert Campbell in 1998 and Philip Dulas in 1999; brothers: Irvin and Raymond; and sister, Iva Proehl.