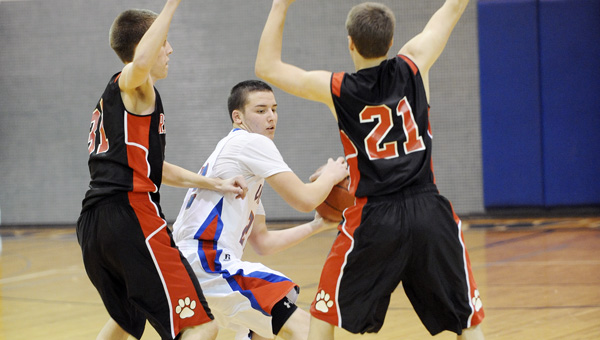 Northwood-Kensett’s Brady Cotter looks to pass the ball after being trapped Tuesday against Riceville. -- Andrew Dyrdal

Michael Theis had 17 points, while Brent Brincks chipped in 16 for the Wildcats.

Riceville went into halftime with a 35-13 lead and outscored the Vikings 31-12 over the final two quarters to secure the win.

The Vikings are back in action on Friday as they travel to Central Springs.

The Vikings led the game in after the first quarter 12-10.

After that, Riceville outscored Northwood-Kensett 44-22 over the final three quarters to secure the win.

Northwood-Kensett is back in action on Friday at Central Springs.