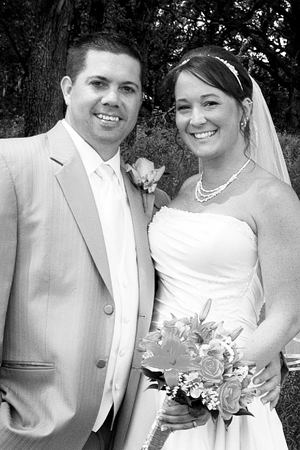 Parents of the groom are Michael and Diane Schindeldecker, of New Prague, and Reinie Hofmann, of Shakopee. Grandma of the groom is Ellen Wirkkunen, of Jamestown, N.D.

Bestman was Tim Huber, of Sioux Falls, S.D., friend of the groom. Groomsmen were Dan Huber, of Shakopee, Ryan Holter, of Burnsville, Dave Feldt, of Shakopee, Shawn Larson, of Belle Plaine, Kurt Stangler, of Baton Rouge, La., Kyle Smith, of Burnsville, and Brett Krushke, of Jordan, all friends of the groom. Ring bearers were Jaden Linn and Darin Linn, both nephews of the bride.

Ushers were Nick Volek, of Belle Plaine, and Bryan Rubendall, of Savage, both friends of the groom, Jeremy Linn, of Conger, and Jon Bakken, of Sartell, both brother-in-laws of the bride.

Music was provided by Ben Olsen, of Zumbrota, friend of the couple.

Personal attendants were Kristen Neuberger and Brenda Holter, friends of the bride.

Hosts and hostesses were Greg and Carolyn Smith, of Alden, and Lowell and Jan Dale, of Rochester, aunts and uncles of the bride.

Guestbook attendants were Brady and Maria Krohnberg, cousins of the bride.

Readers were Amy Williams, of Albert Lea, friend of bride, and Maureen Klehr, of Minneapolis, friend of groom.

Tracie is a 1997 graduate of Alden-Conger High School and has her master’s degree in education through St. Mary’s University, Winona. She is currently teaching developmental adapted physical education for Richfield Public schools.

Shane is a 1996 graduate of Belle Plaine High School and graduated from Minnesota State University, Mankato. He is currently working as a senior loan officer for TCF Bank in Brooklyn Park.

After a wedding trip to Cabo San Lucas, Mexico, the couple resides in Savage.