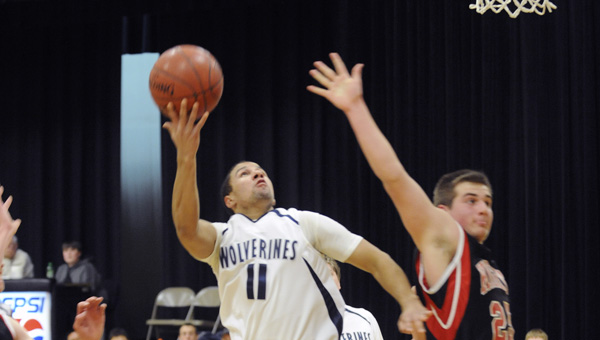 Glenville-Emmons Perry Kirsch (11) flips the ball above his head as he attempts a layup late in the second half Monday against Alden-Conger in Alden. The Wolverines won 67-31 and moved to 7-0 on the season. -- Andrew Dyrdal

ALDEN — Thirteen days without a game — no problem.

The Glenville-Emmons Wolverines boys’ basketball team shook off some dust Monday and cruised to a 67-31 win over the Alden-Conger Knights in their first game since Dec. 21, 2010.

“It was a good win especially right after break,” Wolverines head coach Dan Fredrickson said. “Our defense set the tone and once 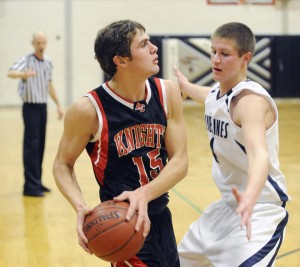 our guys started seeing the ball go through the hoop we got going offensively.”

The Knights scored first to open the second half but the Wolverines answered with back to back 3-pointers by Andrew Lau and Tyler Belshan put Glenville-Emmons on top 52-19.

Later in the second half, Belshan hit another 3-pointer and Lau followed with a breakaway dunk and an and-1 to give the Wolverines a 63-24 lead after the missed free throw.

A Ryan Dempewolf 3-pointer gave the Wolverines their largest lead at 67-26 but five unanswered points to end the game pulled the Knights within 67-31.

Lau led the Wolverines with 23 points and eight rebounds followed by Hall with 17 points and six steals.