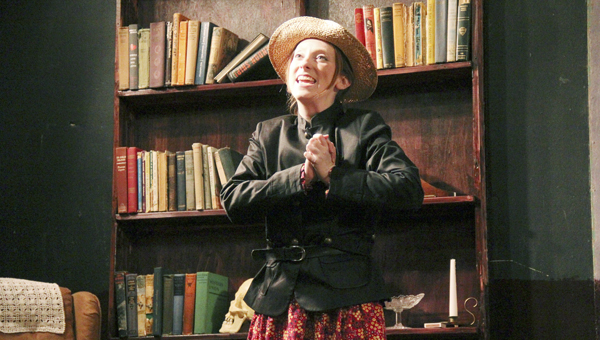 Aimee Germann plays the part of Eliza in “My Fair Lady,” playing at the Lighthouse Event Center in Albert Lea this weekend. -- Michelle Haacke/Albert Lea Tribune

What do you get when you take a group of local volunteer actors, give them a script full of comedy and music, and ask them to perform just three days before the holiday that celebrates love?

At least that’s what 17th Street Players are hoping for as they get ready to begin their five-show run of “My Fair Lady” at the Lighthouse Event Center tonight.

“There’s a lot of humor and a nice blend of some really beautiful songs that will leave people with their toes tapping,” said Lisa Sturtz, director of the musical.

The show revolves around Henry Higgins, played by Gordy Handleland, and Eliza Doolittle, played by Aimee Germann. Snobbish phonetics professor Higgins makes a bet with his colleague, Col. Pickering (played by Al Blumenshein), that he can take flower street vendor Doolittle and make her presentable in high society. While Higgins succeeds, an even bigger question arises as Doolittle wonders where her place in society will become after her transformation.

“It’s a love story, but not a passionate love,” said Sturtz. “It’s more about acceptance and friendship.”

Pepper in the comedy of Paul Burger as the drunken Alfred Doolittle and spectators are sure to enjoy more than a few laughs, as well.

Rounding out the cast are Joy, Sue and Tim Wiersma; Bob Sturtz, Patrick Menning and Sue Jorgensen. Lora Virgil is the musical director.

Handleland hand-picked this cast of characters from his past experience working with them, some through the 17th Street Players and others who are not members of the group. He first worked with Germann last summer in “The Music Man,” and thought she would fill the role of Doolittle perfectly.

Although this will be Germann’s first show at the Lighthouse Event Center, she’s not worried about stage fright. She’s been acting in plays and musicals since high school and majored in music while attending Morehead State University in Morehead, Ky.

Germann’s embraced the lead role not only for the music, but also because of the character’s ability to say what she thinks all of the time.

Sturtz, who in the past has been a part of area children’s theater, thinks the cast gets along well.

“They’ve got big hearts and they’re very generous,” Sturtz said. “They really enjoy their time on-stage together and they’re always helping each other out.”

The show runs about 2 1/2 hours, with intermission.