Beverly Ann (Jensen) Wallace-Kuchera was born on April 3, 1925, in Albert Lea, to Chester and Olga (Schiager) Jensen. She was baptized and confirmed at First Lutheran Church in Albert Lea. She graduated from Albert Lea High School and worked at Wilson’s Meat Packing where she worked as a comptroller. 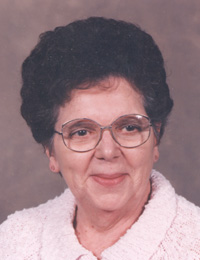 Beverly was united in marriage to Eugene Wallace on Jan. 1, 1947, in Albert Lea. To this union the couple was blessed with four children and Beverly worked as a homemaker. In 1966, the family moved to Alexandria. Eugene died Jan. of 1980. On March 3, 1989, she married James Kuchera in Alexandria, where the couple made their home.

Beverly enjoyed baking and cooking, embroidery, riding her bike, working out at Curves, socializing and going to movies. She had a great sense of humor, was a very kind person and caregiver to anyone who needed help.

A memorial service was held at 11 a.m. Saturday, Feb. 12, at First Lutheran Church in Alexandria. Visitation was from 5 to 8 p.m. on Friday, Feb.11, at the Anderson Funeral Home in Alexandria and for one hour prior to the service at the church on Saturday. Interment will be held later in Kinkead Cemetery in Alexandria.

Arrangements are with the Anderson Funeral Home in Alexandria.