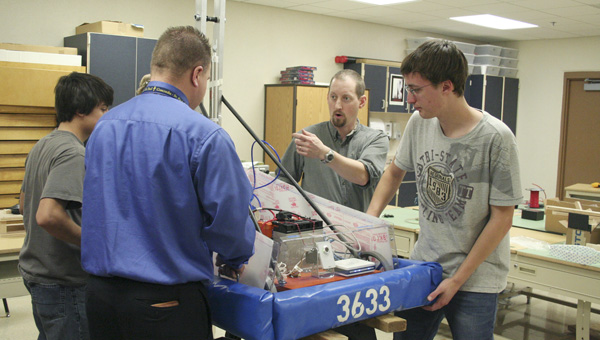 Albert Lea High School staff advisers and students discuss the robot they’re making for a FIRST Robotics competition. This is the first year ALHS has had a team for the competition. -- Kelli Lageson/Albert Lea Tribune

A team at Albert Lea High School has just a few more days to complete their working robot before entering a competition that no team from Albert Lea has been in before. 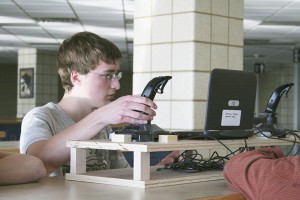 Albert Lea High School student Curi Lestrud drives the robot using a joystick and a computer program. He said the programming is the hard part, while driving is the easy part. AlbertLeaTribune.com has a video of the team. -- Kelli Lageson/Albert Lea Tribune

The first-ever robotics team at ALHS is called Catalyst and will compete against 60 other teams on March 31 and April 1-2 at the FIRST Robotics Competition held at the University of Minnesota Twin Cities campus.

The team is made up of about 30 students, some of whom come every day and some who do specialized work. Besides Ruble there are four more advisers from ALHS staff including Ken Fiscus, Mike Sundblad, Kane Malo and Casey McIntyre.

During the kick-off event the team learned what they needed to make the robot do for the competition. The team has been hard at work after school and on weekends working against a tough six-week deadline.

“The robot has to be able to pick up an inner tube and hang it on a peg on the wall,” Ruble said.

The robot on Tuesday was mostly completed and is able to be driven by students. A mounted camera on the front of the robot shows the driver where the robot is so it can be driven in the right direction. The team was working on the arm that will need to be attached to lift the inner tube and place it on the assigned peg on a wall during the competition. 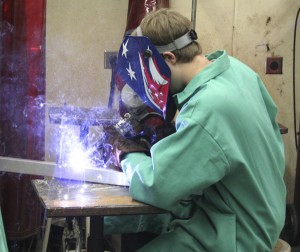 Albert Lea High School senior Jon Koenigs welds part of what will eventually be the robot's arm. The FIRST Robotics team employs about 30 students who do a variety of different tasks. -- Kelli Lageson/Albert Lea Tribune

“There are many guidelines and requirements,” Ruble said. “Everything has to follow stipulations.”

One student, sophomore Mark McGivern, has read the rule book, which is more than 100 pages. Ruble said he’s the go-to person for questions about what is allowed on the robot and that he’s been instrumental in the designing of the robot.

“It’s building a robot, what can I say?” McGivern said. “There’s just something about seeing your idea come to life.”

All the students on the team have their own specialties, including senior Jon Koenigs who does all the welding for the robot.

“I’m the only one who knows how to weld,” Koenigs said.

Other work on the robot includes wiring, programming, designing, fabricating, among other tasks. Junior Amber Bergland has been designing the team logo and then designing T-shirts and stickers to use the logo on. Though she’s helped with other aspects she enjoys the graphics part of helping the team. She said she’d like to be on the team next year and that she enjoys it.

The advisers said the team came about through the curiosity of the students who had been taking the new engineering classes at ALHS. Ruble said they were looking for a way to use the skills they had been taught in a different way. To follow the team’s activities check out their blog at http://alfirstrobotics.blogspot.com.

This is the 20th year of the FIRST Robotics Competition. FIRST stands for For Inspiration and Recognition of Science and Technology and is a nonprofit organization. The goals of the competition are an emphasis on learning, helping others and inspiring students to consider careers in math, science, engineering and technology.