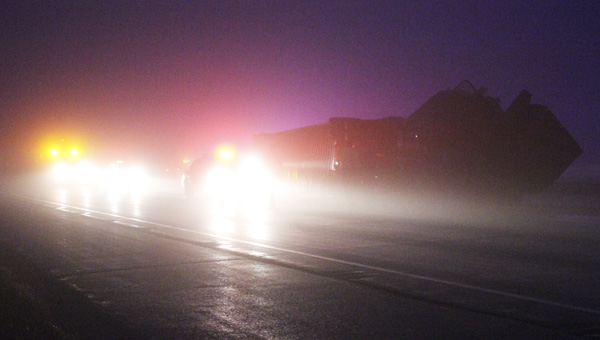 Minnesota State Patrol cars hug the median where a cattle truck flipped this morning. Cattle could be heard inside the trailer. Others were herded into the south ditch. -- Tim Engstrom/Albert Lea Tribune

HAYWARD — A woman was injured this morning when the automobile she was driving hit a cow that had escaped from an overturned cattle truck.

An eastbound cattle truck rolled this morning onto its side and into the median of Interstate 90, east of the Interstate 35 exchange. The crash occurred near the Hayward Rest Area before sunrise. 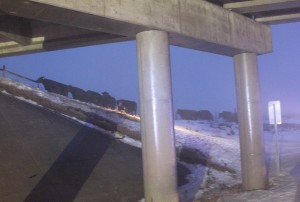 Cattle roam on the south ditch of Interstate 90 this morning near where gravel Freeborn County Road 92 cross the freeway. Firefighters watched over the herd. -- Tim Engstrom/Albert Lea Tribune

The woman was transported away from the crash by an ambulance. Her car remained in the north ditch and appeared as though it had been traveling westward. However, an official Minnesota State Patrol report is pending.

The sound of cattle lowing could be heard. Some were still in the trailer; others were in the south ditch being herded by firefighters. Diesel was leaking.

Fog was causing limited visibility in that area and the sun had not risen.

The State Patrol set up “Accident Ahead” signs to warn drivers of the crash so they didn’t have more collisions. Traffic slowed to a halt at times. Otherwise it remained slower than 40 mph, often in the neighborhood of 25 mph.

Much of southern Minnesota and Wisconsin were in a dense fog advisory this morning; the fog was expected to taper off by noon.