“Everything is nearly copacetic. I’m like a baseball pitcher. I work every fifth day. I just bought a stack of 2007 calendars. I got a good deal on them. They’ll make great gifts next Christmas. I bought a new pillow. I was so excited about it, I couldn’t sleep. I figured I’d better buy a pillow now before the price of gas gets any higher. If it does, it will be cheaper to mail my car to where I want to go. My sister Cruella called me flabby. That may be true, but it’s not winter flab. I keep a few extra pounds on all year. The pounds are like all-season tires for traction. I’ve been sitting at home waiting to find a job.”

“I know, but I looked like a fool on the tour bus.” 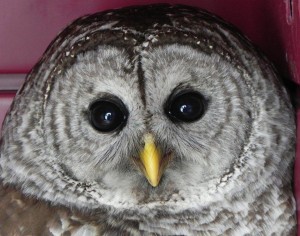 The eyes of a barred owl photo by Al Batt.

I put the barred owl into a pet carrier. His spirit was strong and he glared at me with those staring contest winning eyes. An automobile had hit him and his life was broken like a stick. I took the owl to the Raptor Center. The center specializes in the medical care, rehabilitation, conservation and study of eagles, hawks, owls and falcons. It treats more than 800 birds a year. The Raptor Center is located at 1920 Fitch Avenue in St. Paul and can be reached at 612-624-4745.

The cardinal delighted both sides of the window

Karl Keup, administrator of Kingsway Retirement Living in Belle Plaine, told me that a cardinal flew in through an open door at that facility. Captured and released unharmed, the red bird brightened the day of the residents.

A flight to freedom

Eddie Hanson of Albert Lea was walking in his yard when he came upon an accipiter that had grabbed a mourning dove. Eddie frightened the hawk away. The mourning dove also flew away — in the opposite direction of the raptor.

“What do coyotes eat?” Coyotes are opportunistic and eat what is available. Small mammals such as mice, voles, shrews, rabbits, squirrels and hares are preferred foods. Carrion, insects, fruits, berries, birds, frogs, snakes, plants and seeds are on the menu. Road killed and crippled deer are sources of food as are fawns. In urban areas, coyotes are attracted to garbage, garden vegetables and pet food. They will prey on unattended cats and small dogs. Some coyotes kill small livestock, such as sheep, goats, calves and poultry. Larger animals are usually consumed as carrion. Coyotes can live six to eight years in the wild — most live less than two years. Natural mortality includes disease, predation and starvation. Hunting, trapping and vehicle collisions are common causes of coyote death. Approximately 50 to 70 percent of coyotes do not reach adulthood. Annual adult mortality averages 30 to 50 percent. Males may roam territories as large as 36 square miles. Females generally stay within a six square mile area. Although persecuted endlessly, coyotes are not nearly the threat to humans as are deer.

“Will deer eat birds?” They occasionally eat eggs and nestlings.

“I heard you say on the radio that owls sometimes eat only the heads of prey. Why would they do that?” I’ve lost ducks to great horned owls and often the duck’s head was the only part eaten. When prey is abundant, owls frequently eat only the head. Perhaps it is nutritious.

“How many birds are killed by hitting windows?” It is difficult to quantify such things, but science provides educated estimates.

At least 100 million birds are killed each year in U.S. by collisions with windows. That’s more than 270,000 per day. Cats kill another 100 million per year. The U.S. Fish and Wildlife Service estimates that 5 million birds are killed annually by communications towers. Other studies of these guyed towers place the deaths at 50 million birds. Fatality studies at wind turbines showed about 3 dead birds per turbine or approximately 100,000 birds a year in the U.S. Habitat loss and degradation are the largest causes of declines in bird numbers.

The largest white-tailed deer on record was a buck taken by Carl J. Lenander, Jr., in 1926 near Tofte that was approximately 511 pounds live weight.

Some folks say “rabbit, rabbit, white rabbit” on the first day of each month to insure good luck for that month.

English settlers to North America named the American robin. If they saw a bird with a rusty breast that reminded them of their home country’s “robin redbreast,” a songbird smaller than our robin, they called it a robin. The bluebird was called a robin, the eastern towhee was the ground robin, the Baltimore oriole was the golden robin, the cedar waxwing was the Canadian robin, and the red-breasted merganser was the sea robin.

Pheasant populations decline due to harsh winters, wet springs that cause nest failures, and loss of habitat.

“When you hold resentment toward another, you are bound to that person or condition by an emotional link that is stronger than steel. Forgiveness is the only way to dissolve that link and get free.” — Catherine Ponder

“A week has no basis in nature, as do days, months and years. So birds don’t understand weeks or weekdays. They do know enough to come back to the sidewalk cafe every day for crumbs. But suppose the cafe is in the business district and closed on weekends? What do the birds think of that? I’ll bet they’re really glad when Monday rolls around. Unlike the rest of us.” — George Carlin

Retirement dollars: How much is really enough?