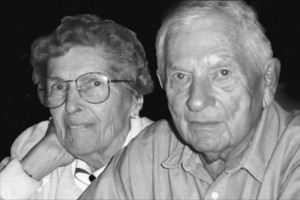 Wess Jensen and his wife, Mae, have established a scholarship fund for students of Albert Lea High School. The amount of money provided in the trust fund for the Jensen Scholarship exceeds $320,000. An advisory committee for this trust fund has been established to award and distribute at least three to eight scholarships per year up to $4,000. The scholarships will go to graduates of ALHS to help finance their attending post secondary educational institutions. All scholarships will be distributed to the educational institutions the recipents attend.

Wess Jensen was born in 1911 in Freeborn County and was educated in the Albert Lea School system. Wess worked as a sales person for Bailey Electric and was a land developer on the west side of Albert Lea. Wess and Mae were married for 45 years. Mae passed away in 1997. Wess died June 16, 2010.

Arlyn Jensen, a nephew of the family, spent time with the couple over many years. Wess was an avid fisherman and enjoyed hunting and raising hunting dogs. In the summer months, Wess and Mae spent their time on an island on Lake of the Woods. Wess held a pilot’s license and flew watercraft for many years taking fishing trips into Canada. For many years after retirement, they spent their winters living in Mazatlan, Mexico. Wess was an active member of the First Baptist Church all of his life.