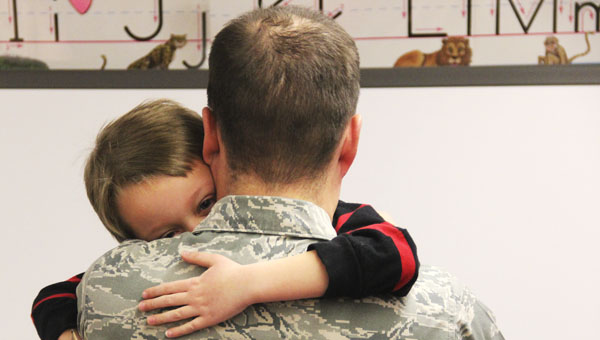 James Bolinger gives his dad, Keith, a hug Wednesday afternoon. Keith had just arrived back in Albert Lea from a deployment to Baghdad, and it was the first time James had seen his father in nearly a year. -- Michelle Haacke/Albert Lea Tribune 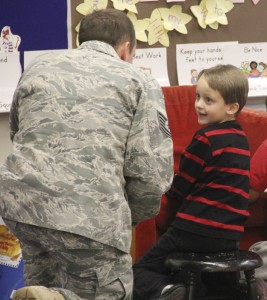 But instead of having his wife, Nissa, and their four children, Kendall, James, Max and Anja, meet him at the airport, Keith had something else in mind.

“I was trying to think of something unique and interesting to do rather than just arriving at the airport,” Keith said.

He decided to surprise his two oldest children, second-grader Kendall and kindergartener James, in their classrooms at Lakeview Elementary.

Nissa contacted the school last week with the plan and was overjoyed at the staff’s willingness to make this surprise homecoming a reality.

Nissa said it wasn’t a difficult secret to keep from the kids, as they didn’t have any idea when Keith was expected to arrive home. A two-day delay in Ireland during the flight home from Iraq, thanks to a maintenance problem with the airplane that Keith’s unit was flying on, was irritating to Keith and Nissa, but had no effect whatsoever on the children. They had no idea daddy was suppose to be home, anyway.

An overnight stay with their grandparents on Tuesday night while Nissa went to pick Keith up at the Minneapolis-St.Paul International Airport didn’t give anything away, either.

The younger two children, Max, 2, and Anja, 7 months, were reunited with Keith first. Even though the family had communicated via Skype while he was overseas, it didn’t take the place of being together as a family. 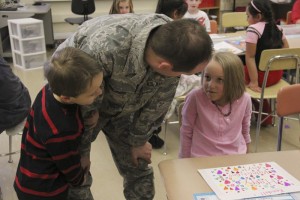 Keith Bolinger and son, James, went over to daughter Kendall's second grade classroom to surprise her.

“Max backed up a few steps at first, but then got excited and kept saying, ‘Daddy’s home!,’” said Nissa.

Because Anja was born the day before Keith was deployed, he was excited to get reacquainted with his youngest daughter.

Less than an hour after arriving home in Albert Lea on Wednesday, Keith was in the principal’s office at Lakeview Elementary, waiting anxiously to see the older two children. James’ class was in the library until 1:45 p.m. and to get back to the classroom, the children would have to walk past the office. Because his teacher, Marcia Sczublewski, didn’t want to risk James seeing his dad on their way back to the kindergarten room, and spoiling the surprise, she asked the family to wait in the principal’s office, as that room doesn’t have any windows. 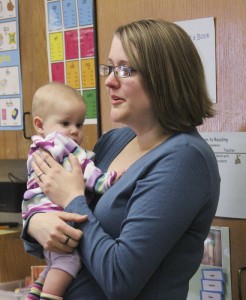 At 2 p.m., Keith quietly entered the kindergarten room and walked up behind James, who had his back to the door as he was busy doing an activity with a classmate. James turned and stared in disbelief for a brief second before he and his father grabbed and embraced each other for several minutes. Afterward, a classmate turned and gave James a congratulations high-five.

A few minutes later, Keith, Nissa, James, Max and Anja walked quietly to Natasha Clarey’s second grade classroom, where the same scene played out as Keith was reunited with his oldest daughter, Kendall.

Both children were excused from school early to spend the remainder of the day with their family.

Nissa said their plans were to get situated again back home and just enjoy being together.

“We’ll probably get in our pajamas and order pizza,” she smiled.