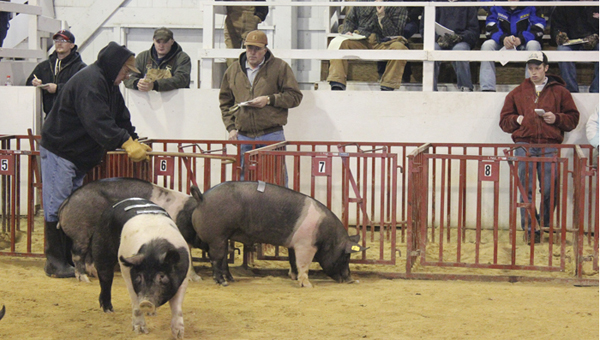 Williamson lives with his family in Glenville. He drives five miles every day to his uncle’s house outside of town to tend to his hogs, and help raise his uncle’s herd. 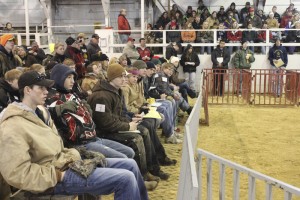 “One day my uncle just asked me if I’d like to show hogs for him,” he said. “That was in seventh grade, and I’ve been at it ever since. Once you get into it, it’s hard to give up.”

Darcie Gayken, FFA adviser at Lake Mills Community High School, took about 25 students to the event on Friday. She estimated about 75 percent of her students haven’t grown up on the farm.

“A lot of students don’t have an ag production background, so this gives them a chance to apply the skills they’ve learned in class,” she said.

She pointed out that the show isn’t just about the hogs these days, either. 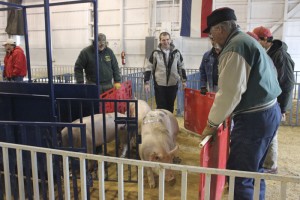 “Even if you’ve never owned livestock, the concept of judging transpires anything you do,” she said. “It’s a good skill to learn and promotes a high level of thinking.”

While this annual show allows children and adults to compete in judging and exhibiting livestock year after year, the focus this year remained on the youth.

More than 100 students gathered around the judging arena Friday morning, honed in on the structure and design of the animals in the ring. Yellow school buses from Lake Mills, Iowa, Alden-Conger and Lewiston-Altura school districts were parked around the fairgrounds. Students from Osage and St. Ansgar, Iowa, Glenville-Emmons, Albert Lea and North Iowa Area Community College also attended.

Local pork producer and event co-organizer Daryl Mattson said about 90 percent of the youth participating were in 4-H or FFA and used this opportunity as a winter project, along with sharpening their skills for the state contest. 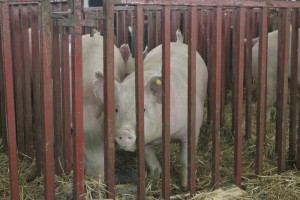 Hogs wait to be judged Friday at the Freeborn County Fairgrounds.

David Berning, the 2011 Minnesota Pork Ambassador, travels around the state promoting the swine industry. He said its more important now than perhaps it ever has been to keep students interested in agriculture overall, as the number of family farms has decreased and kids from farm families are choosing to pursue other interests.

“Even now in tough times, there are still ag jobs,” he said. “There will always be jobs in the ag sector because people always have to eat.”

A freshman majoring in agriculture engineering at South Dakota State University, Berning uses his own personal experience when talking to youth around the state about choosing a career in agriculture. He lived on the only farm in his township, a dairy farm in Wright County. Because he loved hogs, his dad bought him a few to show in 4-H. He didn’t have the opportunity to participate in FFA because the school he attended, Monticello High School, had no FFA.

Pursuing his interest in the pork industry is already paying off for him. He was appointed as the state’s pork ambassador for one year, which started in August 2010, an opportunity that’s allowing him to go to ag events all over, including the National Pork Expo. While most college freshmen barely have a shot in the dark of landing an internship in their field of interest, he said the field’s wide open for him. 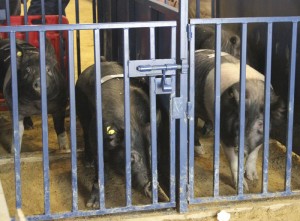 Hogs wait to be herded back to their pens at the Freeborn County Fairgrounds Friday.

“To have an ag degree is almost better than a business degree because of all of the jobs out there,” he said.

Berning also hopes his role in the industry can help dispel myths and rumors about pork production across the board, especially allegations made by the People for Ethical Treatment of Animals.

“There’s a big misconception from PETA and things you see on TV about animal welfare, and it’s a shame they have to go bashing the ag industry,” he said. “People are committed to their animals, more than to themselves. We’re out making sure their waters aren’t frozen up on these cold days, and people don’t always realize that.”

Williamson agreed. He’s at his uncle’s every day after school during the school year and every day, from dawn until dusk, during the summer months. He also sees a bright future in the industry as he plans his own future and plans to attend Riverland Community College for two years before transferring to the University of Wisconsin River Falls.

“I notice a lot of kids born on farms are leaving it because there’s no interest, but I’ll stick with it because I want to work with hogs and in the ag industry,” he said.

Mattson also said the annual barrow show in Albert Lea is important because it’s about the only type of event that allows local youth in agriculture the chance to show off their animals in what some consider the “off-season.”

“It’s the only winter show around,” he said. “It really gives them a chance to show their fall pigs and get a good market for their spring pigs.”

He was pleased with the crowd on Friday and said it’s the biggest crowd the show has drawn for the judging contest in the past few years.

These are the award winners from the 2011 Minnesota State Spring Barrow Show: