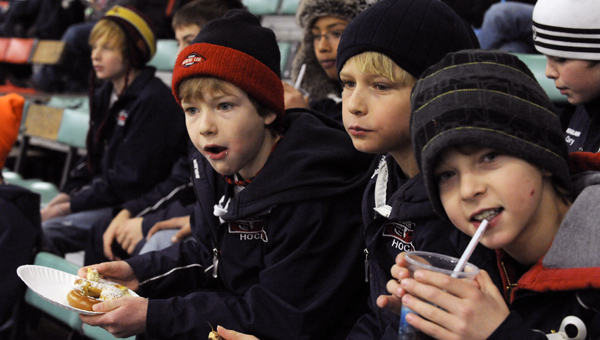 Around 1,500 players, parents and fans filed in and out of City Arena on Saturday for the fifth annual Albert Lea Hockey Day.

Players in Mites through boys’ and girls’ varsity played on one of the arena’s two rinks but weren’t the only ones in on the action. Moms of players from each team took shots from the blue line in the Hockey Mom Shootout, a part of the skills competition, one of the more popular events of the day.

“I thought the day went really well,” said organizer Jolene Svendsen. “It gets bigger and better every year.” 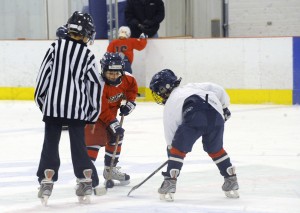 The opening puck is dropped Saturday during an in-house Mites game of Ad-Art against Farmers Insurance Group. The game was part of Albert Lea Hockey Day at City Arena. -- Scott Schmeltzer/Albert Lea Tribune

“I thought, ‘Why don’t we do a local one,’” Svendsen said. “It helps promote hockey and get more people interested.”

Svendsen said Hockey Day has helped generate interest in the sport but hopes it hits a particular group harder.

“I wish we could get more girls out there,” she said. “That’s the group we’d really like to expand.”

During the event’s first two years, not every Albert Lea team had to participate. Now it’s mandatory except for Rink Rats and Mites, who are just learning to skate.

One of the new events this year was the boys’ and girls’ varsity co-ed scrimmage. Teams were chosen by captains, and they played a competitive game without scoring. Svendsen said she had to go through the coaches, Albert Lea activities director Clay Anderson and the Minnesota State High School League to get the scrimmage approved.

“They don’t play together once they leave Squirts,” Svendsen said of the varsity players. “It was nice to get them back on the ice together.”

After the scrimmage about 100 fans packed the ice to skate with the Tigers.

Nystrom, the boys’ varsity head coach, dropped the opening puck at 1 p.m. of the B Squirts game against LeCrescent, Wis., the first official traveling game of the day.

Kelly, a former coach and now team manager of B Bantams, dropped the opening puck of the Junior Gold game. Cream-colored ribbons were also available to wear in honor of Kelly, who is battling lung cancer.

Svendsen said Albert Lea’s mayor typically drops the first puck but Nystrom was chosen because of the career coaching record he set this season.

“It’s a neat way for everybody to get out there and support all the kids and programs,” he said.

The winner of Hockey Day’s essay contest was also announced Saturday. The submitted essays were about the author’s favorite hockey player. Riley Portner, Roy and Jan Nystrom’s grandson and fourth-grader at Hawthorne Elementary School, was chosen the winner. He wrote, of course, about his grandpa.

“My favorite hockey player is my grandpa Roy Nystrom,” Portner wrote. “I never actually got to see him play but know he was good. My grandma tells me so many stories about when he played for the Gophers. I would have loved to seen him play.”

Portner concluded his essay by saying, “I would be honored to play for him in high school. I am so proud of my grandpa.”