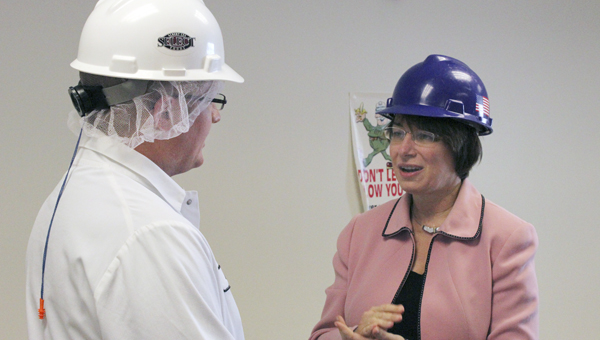 U.S. Sen. Amy Klobuchar is looking toward some of southern Minnesota’s successful businesses to highlight the potential of economic innovation for long-term prosperity.

As a continuing part of her “Innovation Tour,” Klobuchar stopped in Albert Lea Saturday to meet for a discussion and tour at Albert Lea Select Foods.

Despite an economic downturn in recent years, Select Foods has expanded its employees — something Klobuchar said is commendable.

She said people should look at what this company and other successful companies are doing well and then expand on some of those same principles.

“I truly believe to get out of this economic slump, we’re going to be having to be making things again,” she said.

She also talked about a bill she is proposing with Sen. Scott Brown, R-Mass., that aims to revitalize America’s innovation edge and ability to compete in the local economy.

This will help the country be better able to compete in the global economy.

She also talked about the need for a strong Farm Bill as well.

Klobuchar said though it has been a difficult economic downturn, there are companies doing well. She thinks people should look at what these companies did to succeed.

Since Klobuchar began her tour last month, she has been to more than 25 communities throughout the state to tour businesses, visit colleges and meet with local officials.

On Saturday she had other stops planned in Rochester, Harmony, Austin, Fairmont and St. James. .

Klobuchar serves on the Senate Commerce Committee and chairs the Subcommittee on Innovation, Competitiveness and Export Promotion.