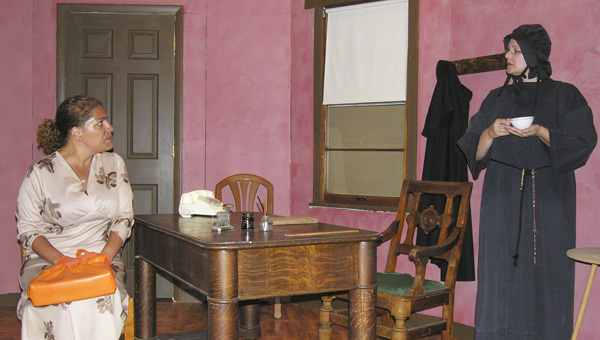 Lisa Sturtz, on right, acts in “Doubt” in 2009 at the Lighthouse Event Center. -- File photo

Salute to the Arts

An Albert Lea woman has quite a theatrical family.

Lisa Sturtz, who lives in Albert Lea with her husband, Bob, has been acting and involved in local theater since 1991.

Their four kids, Rachel, Anna, Evan and Jack have all been involved in performing in various ways.

She ended up playing Lady Thiang, which was a larger part than she expected.

She said she loved meeting the other performers and people who worked on the play.

Because she was pretty new to town when she tried out for that first play, she thought it would be a good way to get to know other people in the community.

“There’s something more welcoming about the arts in a small town,” Sturtz said.

Since that first play she’s been involved in a total of 42 productions at Albert Lea Community Theatre, Lighthouse Event Center and other venues in Austin as well.

Other than acting Sturtz has helped with costumes, lighting, sound, make up, and most recently, directing.

She directed a production of “My Fair Lady” at the Lighthouse Event Center earlier this month. Directing was a fun challenge for Sturtz because she got to experiment with all the roles in the play. She said as an actor watching directors talk with the cast she had often wondered what she would do in that position.

“With directing you get to play all the parts instead of just one,” Sturtz said.

Sturtz isn’t able to choose a favorite production, because they’re all so different and interesting in their own ways.

Some significant productions in her life include “Joseph and the Amazing Technicolor Dreamcoat,” where she met many friends. She also enjoyed “Man of La Mancha” because of the fun cast.

Sturtz also enjoyed doing a costumed concert of “Mamma Mia” because she played the mother role, and her daughter, Anna, played the daughter. Her husband, Bob, also had a part, which made it a family production.

Sturtz said she enjoys the teamwork it takes to make a successful production. Many elements have to come together before a play or musical is ready for the public.

“I love the people I’ve met — it’s a really fun thing,” Sturtz said. “To all work together to pull something together bonds you.”

Sturtz said that while her children were growing up it took some juggling to be involved in plays with night practices and performances. As a mother, she’s glad she had theater in her life to have something that was just hers. Now that her children are grown and out of the house, she’s glad she still has theater because her role as a mother is not as intense with the kids not at home.

“It’s a wonderful, affirming thing,” Sturtz said. “It gave me something that was mine.”

She said she wished more people in town were willing to take the risk to go to auditions or even just to go to productions.

“It’s a wonderful thing we have in town,” Sturtz said. “There’s always a job for someone who’s willing to help.”

She said the theater community is welcoming and always willing to teach anyone who would want to help out with productions.