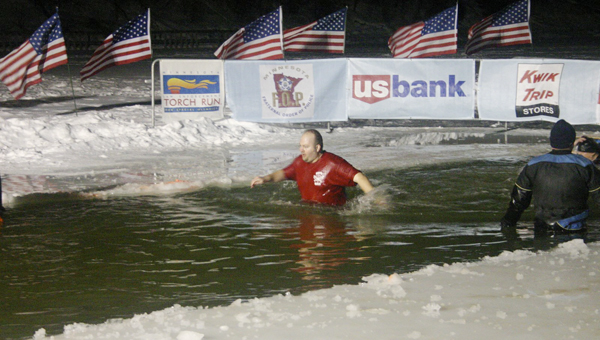 Wade Chance of Albert Lea is pictured after a Friday night jump at the Super Plunge event in Rochester. Chance jumped in 25 times during a 24-hour period. -- Submitted photo

Chance jumped into icy water not once, but 25 times within 24 hours during the Super Plunge event last Friday and Saturday during the 10th annual Rochester Polar Bear Plunge.

“That first jump is a shock to your system,” he said. “You can’t tell if it’s hot or cold. It confuses you for a second. You come up and it takes all of your senses away.”

While more than 800 people participated in the Polar Bear Plunge on Saturday, Chance was one of only seven people who took part in the Super Plunge event, which began Friday afternoon.

To become a “super plunger,” participants were required to raise a minimum of $3,000 for Special Olympics Minnesota. With the help of his family, friends, co-workers and local businesses, Chance raised $3,650, earning him a spot as a “super plunger.”

Chance took his first plunge at 3 p.m. Friday, and jumped into the icy waters at Foster Ahrend Beach in Rochester once an hour until 9 p.m. To get all of the jumps done within the 24-hour time period, participants then dove in four times in a row at 9 p.m. and another four times at 10 p.m.

Chance was also required to bring a handler with him, so his brother-in-law, Jim Wroblewski of Winona, stood by and gave Chance dry clothes to change into after each jump. He wore T-shirts, shorts and tennis shoes.

Chance said air temperatures ranged from 19 degrees to the mid-30s. According to the event’s website, the thermometer read 34 degrees with a wind chill of 25 degrees on Saturday afternoon. The water temperature rose to a brisk 33 degrees and the ice thickness measured 16 inches.

He said the water was chest high on him, or about five feet deep.

After each jump, Chance and the other “super plungers” would head to a hot tub or portable sauna set up at the park to warm up. It warmed his heart knowing he was helping a good cause and the atmosphere was very positive, with about 60 Special Olympics athletes at the event cheering on the “super plungers.”

“I think it’s the funnest thing ever,” Chance said. “It’s chilly but your adrenaline, the crowd and the cause were just great.”

Chance said he’s participated in the Polar Bear Plunge for five years. The coldest time he jumped in was three years ago, when the wind chills plummeted to 5 degrees below zero. He tried to qualify for the Super Plunge a few years back but didn’t raise enough money.

“If it’s warm out, it ain’t any fun,” he said. “Anybody can jump in water when it’s 50 degrees outside, so the element of street credibility is there.”

Although Chance will not be able to participate in this weekend’s polar plunge at the Big Freeze in Albert Lea because he’ll be working, he had a few tips to offer up to those who will be taking the plunge: Wear shorts rather than long pants and tight-fitting shoes versus flip-flops.

“Long pants are hard to get off when you’re soaking wet and flip-flops just fall off,” he said.

He also advised jumping in over your head.

Saturday’s Polar Bear Plunge in Rochester was one of 14 events of its kind going on around Minnesota to support Special Olympics. The Rochester event raised more than $183,000.