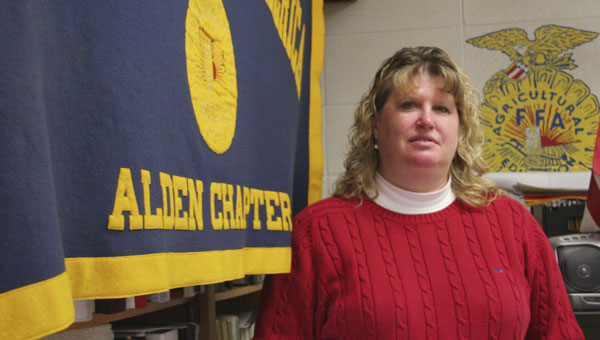 Pam Koenen has been the FFA adviser and ag teacher at Alden-Conger School since the 1991-1992 school year. -- Michelle Haacke/Albert Lea Tribune

ALDEN — As a child, Pam Koenen never imagined she would serve as a director of a barrow show, let alone be in charge of the judging competition. 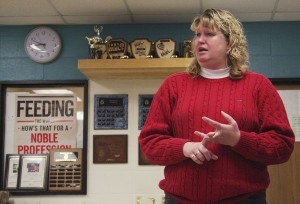 “I grew up on a dairy farm,” she said. “My grandpa raised durocs. That was the only experience I had with hogs growing up.”

Now, Koenen’s just one year shy of her 20-year mark as the superintendent of the market hog judging contest at the 67th annual Minnesota State Spring Barrow Show this Friday.

“I always thought I’d end up teaching, but no, I never would’ve imagined this,” she said.

Passionate about the dairy industry growing up, her switch in interests from dairy cattle to hogs didn’t surprise her family that much.

“It was probably a bigger shock to my dad when I decided to be an ag teacher,” she said. 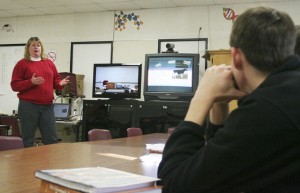 Koenen grew up near the small town of Waverly, about 50 miles west of Minneapolis on U.S. Highway 12. She and her brother helped their dad with the milking operations. She joined Future Farmers of America her senior year in high school and really enjoyed it.

Her interest in pursuing agriculture beyond her own high school years, however, was not encouraged.

“I graduated in the mid-80s, at the height of the ag crisis,” she said. “There was a lot of resistance from educators. The counselor urged nursing.”

At that time, Koenen felt like she had three strikes against her. Strike one was that she was a farm kid who wanted to pursue an education in agriculture. Strike two was the fact that she wanted to become a teacher, as her school had just gone through the largest teachers strike in Minnesota. Strike three was that she would be attending the University of Minnesota.

“It was the only place you could get an ag/ed teaching degree, but I was going from a graduating class of 400 to a campus with 40,000.”

After college, Koenen accepted her first teaching job at Glenville in 1988, before the district consolidated with Emmons. The first barrow show she worked was the spring 1989 event, where she helped with weigh-ins. The former agriculture instructor from Alden recruited her, as he headed up the judging at that time.

Fast forward three years. After taking a couple of years off to start her family, Koenen took over as the agriculture teacher at Alden, and with it, Spring Barrow Show judging duties.

The superintendent of the market hog judging contest since 1992, Koenen said the focus of the barrow show has always remained the same: the youth.

Educating people about the ever-changing swine industry, what’s new and how the industry has changed, is another benefit of the show.

“The barrow show is like the industry. You either change and adapt or become obsolete and go out of business,” she said. “As the hog industry has changed, the show has changed.”

She said the hogs that come through the show are leaner and more muscular than those of 20 years ago. She also said they see fewer exhibitors because there are fewer family-owned farms; although the past couple of years have seen some boosts in the numbers. Still, this has led to the show moving from a two-day event to just one.

“The kids are just busier now,” she said. “They’ve added games to sports and a number of things, the play, robotics, get moved to weekends.”

Nonetheless, Koenen sees a strong future for the Spring Barrow Show and the youth who participate in it.

“We’ve tried to add classes to appeal to more people and find things to bring more opportunity to the show.”