The funeral service for Myrtle I. Nelson will be held at 10:30 a.m. Friday at Bonnerup Funeral Service Chapel, Albert Lea. The Rev. John Holt will officiate. Visitation will be one hour before the service at the chapel. Interment will be in the Hillcrest Cemetery. 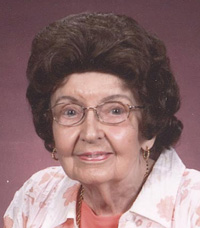 Myrtle was born in Roseau County near Warroad on Sept. 24, 1914, the daughter of Ole and Tolmina (Ruth) Peterson. At the age of 2 her father died and she was 3 when her mother died. She and her siblings were taken to live with their uncle Theman Ruth, east of New Richland. She was baptized on Feb. 9, 1915, at the LeSueur River Norwegian Church, rural New Richland, by the Rev. J.C. Walledom and confirmed May 27, 1928, at Trinity Lutheran Church in New Richland also by the Rev. J.C. Walledom. She married Herbert Christensen in 1932 and to this union three children were born: twins, Lavonne and Lorraine, and son, Gerald. Myrtle and Herbert were later divorced.

On Aug. 16, 1952, Myrtle married Kenneth I. Nelson at the First Lutheran Church in Albert Lea. Myrtle had worked part-time at the Freeborn Hotel, for Unique Cleaners for three years, Universal Milking Machine Company for three years, and then at Wilson & Co., slicing bacon for more than 30 years, before retiring in 1977.

She was a member of the First Lutheran Church, the American Legion and V.F.W. Auxiliaries. Myrtle loved to bake, with lefsa being her specialty. She enjoyed playing bingo, huckley buck card games with her family and the many family trips to Las Vegas, Alaska and Hawaii to name a few.

Myrtle will never be forgotten, but always loved. The thought of her will always make us smile. May you shine your love down from Heaven above.

Beverly Ann (Jensen) Wallace-Kuchera was born on April 3, 1925, in Albert Lea, to Chester and Olga (Schiager) Jensen. She... read more