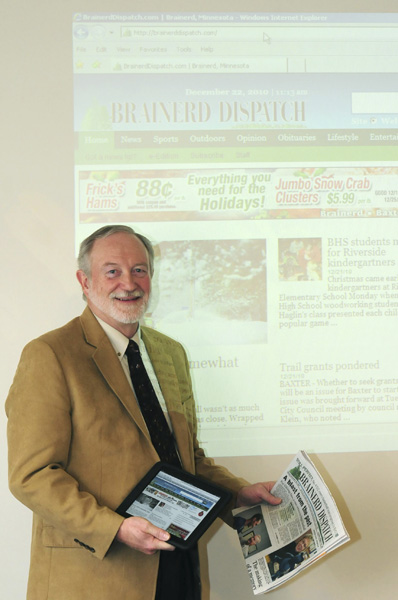 Tim Bogenschutz, former Albert Lea resident, became the new publisher of the Brainerd Dispatch on Jan. 1. His journalism career started at the Albert Lea Tribune during 1975 in advertising sales. -- Photo by Steve Kohls/Brainerd Dispatch at www.brainerddispatch.com, used with permission

Tim Bogenschutz, who grew up in Albert Lea, became the new publisher of the Brainerd Dispatch paper at the start of 2011. In fact, his career with journalism started at the Albert Lea Tribune 36 years ago.

The new publisher of the daily newspaper that has been the prime source of news for the Brainerd Lakes region for nearly 130 years is the son of the late Edwin and Virginia Bogenschutz who lived on Wedgewood Road. He graduated from Albert Lea High School in 1968. During the three years as a high school student, the yearbook says he was active in sports, band, orchestra, Tigers’ Roar and in the casts of several plays.

After graduation he attended Austin Junior College and worked for several area firms.

He married Nancy Behrends, a 1970 graduate of Albert Lea High School, in October 1972.

From 1975 to 1977 Bogenschutz was an advertising sales representative for the Albert Lea Tribune. He said this was followed with working for Nordaas American Homes of Minnesota Lake for about a year.

In 1979 the young couple moved north to the Brainerd/Baxter area, and he became an advertising account representative for the Dispatch. He was later promoted to the position of sales manager.

His interest in fishing eventually resulted in working for In-Fisherman of Baxter for a dozen years. He said this outdoors oriented sports firm then had the nation’s No. 1 telecast on The Nashville Network (now Spike TV), plus several freshwater fishing magazines and programs broadcast on several hundred radio stations.

In May 2005, he returned to the Dispatch. Now, less than six years later, he replaces Terry McCollough as the publisher of the Dispatch. And as his column in the Jan. 2 issue states, this is the first time in 80 years that someone from the McCollough family has not been at the helm of the Dispatch.

Tim and Nancy Bogenschutz live in Baxter, a twin city just to the west of Brainerd. They have three daughters: Bethany, Sarah and Laura. Both he and his wife are involved with civic and church organizations and she has a wallpaper business which has been operating for more than 20 years.

An article in the Jan. 2 issue said the new publisher of the Brainerd Dispatch enjoys living in this part of Minnesota because it allows him to enjoy pastimes like golf, photography and fishing. He’s quoted as saying, “What I love is the outdoors.”